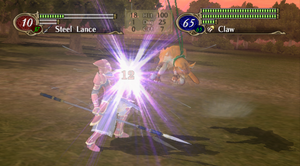 The strike (Japanese: 打 strike) is a weapon classification encompassing the various weapons used by non-human units. By definition, a strike weapon is a means of attack which is part of the user's anatomy. They are the primary mode of attack of most monster species, and the only means of attack available to laguz. The category does not include stone, breath, and judge weapons.

In Heroes, beast (Japanese: 獣 beast) weapons are the primary means of attack for units capable of transforming. Like breath weapons, their color depends on their user. A unit with a beast weapon can transform, and receives bonuses upon doing so.

All strikes have infinite uses, not being affected by durability. In Fire Emblem: Path of Radiance and Radiant Dawn, since they are part of the user's anatomy, strikes cannot be unequipped from laguz units and cannot be dropped, traded, or sold. Radiant Dawn and Fates are the only games where strikes are tied to an increasing weapon level and can gain weapon experience; in Radiant Dawn, laguz strikes are continually replaced with stronger, higher-ranked variations as laguz units reach higher weapon levels.

Strikes are almost entirely physical weapons which use the user's strength stat and target the foe's defense stat; the exceptions are Ravager in The Sacred Stones, and the White Dragon's Breath in Radiant Dawn, which are both magical weapons.

Although the term "strike" is only explicitly used in Fire Emblem: Radiant Dawn to describe laguz weapons, numerous other games can be said to have strikes. The laguz weapons of Path of Radiance are also strikes as they were in Radiant Dawn. In games that feature monsters (Gaiden, Shadows of Valentia, The Sacred Stones, Awakening, and Fates), there are numerous monster-only weapons that do not otherwise fit into another category (e.g. Shadowshot as dark magic, Wretched Air as breath) and thus can be called strikes. Awakening calls its strikes "claws" or "blights", while Fates separates its strikes into fists, rocks, and saws (claws, stones, and puppets in the rank descriptions), each with access to the weapon level for non-human weapon. Monster weapons of The Sacred Stones are classified by the game as basic items despite their combat usage, and do not display their weapon stats in gameplay.

Beast weapon skills are associated with various animal-based characters in the series, such as laguz and taguel; as physical weapons, they target defense. Unlike most other weapon types, most beast skills can only be equipped by units of certain movement types, sorting the skills into four "sub-types" corresponding with each of the movement types (infantry, armored, cavalry, and flying). Like weapon types such as breath and bow, beast weapons do not have a set color, and use the color of their equipper—Adult (Infantry), for example, is red when equipped by Keaton: Lupine Collector, but green when equipped by Keaton: Resolved Wolfskin. Also like breath weapons, beast weapons provide a source of bonus damage for weapons such as Flame Lance to target.

Beast weapons allow their users to transform when they are not adjacent to a human ally (i.e. one wielding any weapon type other then beast or breath) at the start of their phase, and un-transform at the start of a turn when they are adjacent to a human ally; on turns where the user transforms, they also receive additional boosts based on the weapon, generally including an attack boost, though there are trends between movement types:

Strikes in the Fire Emblem series by type

These weapons are used by laguz units in Path of Radiance and Radiant Dawn. Every laguz unit has one strike weapon and cannot use any other.

These weapons are used exclusively by the Automatons deployed by Hoshido.

Technically speaking, strikes as a formal weapon classification exist only in Radiant Dawn, although laguz weapons were included in the previous game and other non-human weapons have existed as far back as Gaiden. As such, this list actively interprets any class which has had access to the non-categorized non-human weapons as being able to wield strikes. 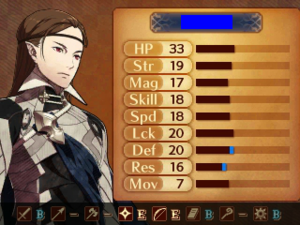 Corrin with an inactive B-level in saws after being reclassed into a Mechanist.