It is set on the continent of Tellius, which is home to the laguz and beorc. The game revolves around the conflict between the species.

The game starts off with a cut scene showing Ike training with his father, Greil, in swordplay. He is knocked out by Greil when Mist comes running into the forest. After recovering, Ike trains with Boyd and Greil some more and officially is considered one of the members of the Greil Mercenaries.

After joining the group, Ike is sent out to do the many jobs that the Greil Mercenaries were hired for. One mission dealt with Bandits who were bothering a local village. Another dealt with bandits at a sea port. Soon, eventually, they learn from Soren that the kingdom of Daein invaded Crimea and soldiers were sent everywhere. They run into one of Daein's generals and defeat him, and soon after find Princess Elincia.

After saving Elincia, they decide to head to the beast-laguz filled kingdom of Gallia to hopefully get safety from Daein. They split up and Ike worries about his father not coming back and head back towards Crimea. They spot something moving into the fort so they investigate, but find no one, but soon are cornered. After defeating the second-in-command of the small battalion they run into one of Daein's Four Riders, and Greil defeats her. Soon a knight in black armor appeared and he and Greil exchange looks before he disappears. Later that night, Greil and the Black Knight have a duel in which the Black Knight throws a sword to Greil to use. The Black Knight then refers to Greil as his real name,[3] but Greil shakes it off, saying it was no longer his name.[4] After which they resume battle but Greil is stabbed in the chest. Ike challenges the Black Knight to defeat him, but soon realizes that he is too weak to do so. A lion's roar was heard and the Black Knight flees leaving Ike to drag back his dying father to camp, hoping to save him. However, his efforts were fruitless as Greil dies, leaving the mercenary group to fall into despair. Shinon and Gatrie then leave the group soon after, leaving Ike and his comrades to defend the fort before two laguz named Lethe and Mordecai come rescue them.

After meeting the Lion King, Caineghis, they are given some money from him (20,000 Gold) to help them on their trip to Begnion and go to a Crimean fort where Nephenee, Brom, Kieran and Sephiran were kept hostage. After freeing them they head for a Crimean port where it's full of people who looked down on laguz. When Ranulf's true identity was revealed, villagers began to beat him up and Ike tried to save him, but the townsfolk alerted the Daein army. After getting through the port town, Ranulf runs into the Black Knight and fights him, but loses. Before he dies, Sephiran tells the Black Knight to stop, and the knight backs off, letting Ranulf live.

Overseas, Ike runs into crow laguz who attack his ship when they get stuck in a coral reef. They defeat them and Ike hops onto the land of Goldoa, and immediantly three dragon laguz attacked him, but were stopped by their prince, Kurthnaga. Kurthnaga orders the three dragon laguz to push Ike's boat safely out of the reef and replenishes Ike's food and water supplies. Overseas they help a Begnion ship which was attacked by Daein soldiers and find their old ally Gatrie fighting for Begnion. They soon meet with the Apostle who stowed away onto Ike's ship and they talk to her about Elincia's request for aide. 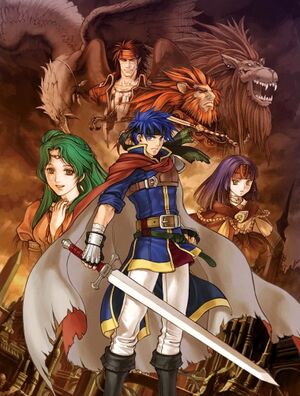 Some of the powers of Tellius.

To gain the trust of the Apostle, Sanaki, Ike and his mercenary group had to go do several tasks to uncover laguz slavery that was still in Begnion. They first fight a group of bandits who were transporting several heavy creates full of laguz and even a few Feral Ones. Afterwhich they are sent to the desert where they meet Tormod and Muarim (and Stefan in the northeastern section of the desert with either Lethe or Mordecai). The slavery is revealed and they set off to investigate the Duke of Tanas, Oliver, and find out he was trying to keep a white heron as his own, but the heron leaves saying to them all: "Remember the genocide! Twenty years have passed, but I will never forgive what you did!"

Sanaki and Ike's group decide to check out the Serenes Forest to look for the Heron as Oliver looked feverishly. As they enter the forest they are confronted by some of Oliver's soldiers and have to fight their way through four sections of the forest. In the middle of the forest they see another heron, a female one, who collapses. Oliver spies her and confuses her with the male Heron, Reyson, and immediately he orders his soldiers to attack Ike's group to gather the heron that Ike now carried over himself. They proceed on with Ike still holding onto the female Heron before Tibarn, the Hawk King, Ulki, Janaff, and Reyson join in the fight due to noticing Ike having the female heron his back. After they defeat Oliver, the female is revealed to be his sister, Leanne, and they have a discussion with Sanaki which eventually leads to Reyson slightly forgiving the Apostle for what had happened. Soon after they sing a Galdr which restores Serenes Forest to normal, making the forest come back to life as plant life came back and leaves grew back on the trees.

Crimea Marches and Reclaims its Land 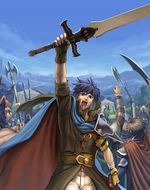 Ike rallying his troops to gain back Crimea.

Gaining the trust of the Apostle and gaining Begnion's forces alongside theirs, the newly named Lord Ike and his army march northward to Daein to defeat the Mad King Ashnard. Along the way they go through a snow-covered fort in which they notice Shinon working with the enemy. They proceed more through Daein and along they way are stopped as floodgates were opened and farms were destroyed. After they get through they eventually reach the Daein capital and fight Ena, a servant of Ashnard's, and manage to defeat her, but she escapes as Nasir let her go, ending up in his arrest, as they realize he was the one who stole Lehran's Medallion from Mist. 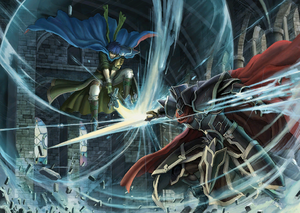 Continuing on they go through one of the churches dedicated to the goddess Ashera and save many of the priests there. They cross a great bridge and defeat another of one of Daein's Four Riders, Petrine, and manage to get into Crimea. Passing over a mighty mountain side, they meet up with Gallia reinforcements and continue on their way. They decide to attack two forts by separating Ike's army from Tibarn's, and attack the forts at the same time, but Ike had to finish the remainder in the second fort. There Ike fights the Black Knight again, and depending on how well he fights, either Ike continues with Nasir coming to the rescue and turning into his White Dragon form, defeating the Black Knight, and perishing under the ruins of the fort or Ike defeats the Black Knight and Nasir decides to join the group. Afterwhich, by Ena's word, they reach a tower in the forest where Leanne was kept captive, and they manage to defeat both soldiers and Feral Ones alike. They save Leanne due to Naesala's help and they find out how much Daein was doing experiments on the laguz to make them feral and stay in their beast form.

They head for Crimea's capital soon after and enter the castle where the Mad King was waiting for them. Elincia, Ike, and Ashnard have a small conversation and the battle begins. They fight through his soldiers and Ena suggests to get backup in which Ike can either choose Tibarn, Giffca, or Naesala. Ashnard's army soon falls and Ike and/or selected backup partner then attack Ashnard, eventually brining him down to his knees and defeating him. Ashnard's mount, Rajaion still lives and Ena runs over to him and hugs him, comforting him, before Reyson and Leanne sing yet another galdr to revert him back to his true form.

Everyone says their farewells and leave, as Ike heads off and runs into Sephiran. They discuss about what they've learned and Ike and Mist both discuss about not finding Altina who needed to know the galdr of release. Sephiran mentions it is Sanaki who needed to know the song and Mist is suddenly tired and leaves. Ike and Sephiran talk more before Ike leaves, and Sephiran mentions out loud to himself that Ike's troubles were only just starting.

Ike and Elincia have a discussion before she heads out to see her people. She is unsure if she could run the country. Ike asks her if anyone taught her how to hire mercenaries, how to win lost allies, how to get back her lost kingdom. Elincia says it's different, and Ike says it's not, believing she would do a good job as queen of Crimea. She thanks him for his support and they both head out to see the people.

Like the rest of the Fire Emblem games, Path of Radiance is played on a grid-like map, but using 3-D models instead of game sprites. The game is played slightly overhead of the characters, but can be adjusted using the GameCube controller's C-Stick. As well, the X button allows the player to select their next available unit.

Unique to this game (until its successor, Fire Emblem: Radiant Dawn) was the feature of special units, called laguz being able to transform into their respected animal for a short time without any limit to how much they could attack aside from their Transformation Gauge. This is similar to the Game Boy Advance games in which Manakete units were able to use Dragon stones to attack. Special Laguz Stones are found in the game and are used to transform laguz immediately, however they still have a limit on how long they can stay in their animal form. A Demi Band is also acquired later which allows the unit to stay in their animal form with their abilities hindered.

Fire Emblem: Path of Radiance was a successful game, getting a score of 8.7 from IGN reviewer Peer Schneider.[5] The game was also runner-up for IGN's Game of the Month for October 2005.[6]