This article is about the weapon type. You may be looking for Axe (Famicom), the most basic version of the weapon type in the NES games.
Club redirects here. For the weapon introduced in Fire Emblem Echoes: Shadows of Valentia, see Club (Terror). 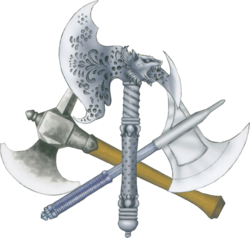 The Axe (Japanese: 斧 Axe) is one of the primary weapon types in the Fire Emblem series. A physical weapon type, axes typically possess the greatest raw power of physical weapons, yet are considerably heavier, and have lesser accuracy; in this respect, axes are similar to dark magic. Along with swords and lances, axes are part of the weapon triangle; in accordance with it, they possess an advantage over lances, but are weak to swords. In Fire Emblem Gaiden and its remake, Fire Emblem Echoes: Shadows of Valentia, axes are only available to enemy units, while in other titles they are used by both playable and enemy units.

Greataxes are the Engage equivalent of the poleaxes.