Fire Emblem Cipher[1] (Japanese: ＴＣＧファイアーエムブレム０（サイファ） TCG Fire Emblem 0 (Cipher)) is a collectible card game based on the characters and settings of the Fire Emblem series. It is the second card game based on Fire Emblem, after the original Fire Emblem Trading Card Game. Unlike its predecessor, Cipher was developed and published in-house by Intelligent Systems.[2] Cipher began publication in 2015, as part of the release of Fire Emblem Fates, and currently has twenty published series of cards with two more more upcoming. After the twenty-second series is released in October 2020, Cipher was discontinued.[3]

Unlike the original TCG, which relied primarily on a single artist to illustrate the majority of its cards, the cards of Cipher feature illustrations from a very wide variety of artists (there are 178 credited illustrators), many of whom had no prior attachment to Fire Emblem. Art contributions for Cipher were overseen by art director Daisuke Izuka, who also contributed some card illustrations himself.[4] Among these artists are several returning designers from earlier Fire Emblem games, including Sachiko Wada, Rika Suzuki and Senri Kita.

For more information, see the Comprehensive Rules of FE Cipher on Serenes Forest.

Cipher is a two-player game which revolves around each player building an army to defend their designated "lord" character (which can be any card with a cost of 1) from their opponent's army. When setting up the game, each player sets aside five face-down cards to act as orbs, which act as the hit points for their lord. Every time a player's lord is defeated, the player must take one of their orbs. Once a player has taken all of their orbs, then had their lord be defeated a sixth time, the game is over and that player loses.

Players deploy cards onto the battlefield as active fighters in either the Vanguard Area (front line) or the Rearguard Area (back line), but the player must also play other cards as bonds to pay the costs for deployment, class changing, and execution of certain skills which are listed on each card. During the sequence of an attack, cards are played as supports in the Support Area, where they give a bonus to the attack power of the units involved in an attack. When a unit in the Vanguard or Rearguard (except a player's lord) is defeated, it is sent to the Retreat Area, the game's discard pile. 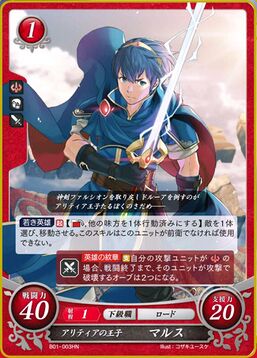 "Altean Prince, Marth", an example of a typical Cipher card.

Unlike the previous Fire Emblem Trading Card Game, all cards in Cipher depict individual units. Each card is comprised of the following stats and elements: 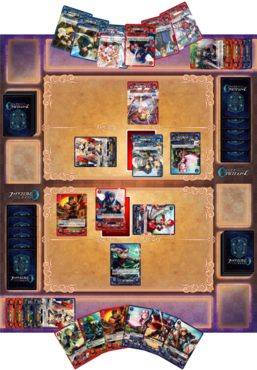 A Cipher game mat with a game in progress.

In a game of Cipher, much like the main Fire Emblem games, each player takes turns to perform actions. Each player's turn is broken down into five phases:

At the beginning of the game, the player who goes first must skip the Beginning Phase and is not allowed to initiate an attack during their Action Phase.

Cipher releases a new series of cards every three months, with each series typically focused on two or three Fire Emblem games. Like most trading card games, there are two primary distribution packages: starter decks which contain a pre-determined set of 50 cards which typically focus on one Fire Emblem game or faction, and booster packs which contain 10 random cards each. Booster packs can also be bought in bulk as booster boxes, which contain 16 packs each; in addition to the 160 random cards from the enclosed packs, booster boxes also contain one promotional card previewing the next series and a set of card sleeves decorated with Fire Emblem art.

In addition to the regular starter deck and booster pack cards, some cards are distributed as promotional cards which are only available with certain purchases or by attending certain events. Some promotional cards are entirely unique, while others are reprints of pre-existing cards that feature new art. Typically there are between ten and eighteen promotional cards accompanying each series, two of which are almost always the preview cards enclosed in booster boxes. 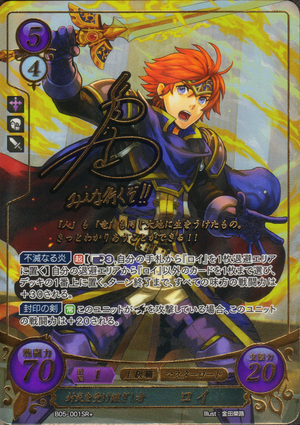 This Roy card is an SR+ card, the highest possible rarity. It features different art and a different border from the regular SR print, and it is signed by Roy's Japanese voice actor, Jun Fukuyama. The card is printed in holographic foil, although it is not visible in this image.

Cards are grouped by rarities, which determine how likely it is to find a given card in a booster pack. Rarity is denoted in the card's number as a 1/2 letter suffix.

Each booster pack contains six N cards, three HN cards, and 1 card that is either an R, an SR, or one of their respective + variants.

Some R and SR cards are also given alternate, even more rare R+ and SR+ prints, which usually feature either different art or the signature of the character's Japanese voice actor or, less frequently, the card's artist. Each series features 6 SR+ cards and 8 R+ cards, and like the regular R and SR cards, they are also printed in holographic foil. On average, there is only one card of any + rarity in each booster box.

Starting from Series 5, each series also contains one card of +X rarity (usually R+X, although Series 9 had a N+X card instead), which are usually special preview prints of cards due for release six months/two series later, usually from the one of the same symbol affiliations as is featured in the current set; for example, the first R+X card, Eliwood, was released in Series 5 (a set that prominently featured Elibe) before its regular R counterpart was released in Series 7. +X cards are treated as a secret by Intelligent Systems, in that they are never revealed before the series is released, and they are not even added to the card list on the official website until several weeks after the series' release.

Live streams promoting Cipher were periodically held every one or two months on the Japanese video site Niconico, previewing cards and artwork for upcoming Cipher sets as well as both announcing new events and covering the outcomes of recent ones. The live streams were hosted by Ryota Kawade, the producer of Cipher, and by Young, another Intelligent Systems employee. They were accompanied by guest artists and voice actors; frequently recurring guests included Eri Suzuki, Emma's voice actress; Michihiko Hagi, Ike's voice actor; Kenichi Hatori, a prop maker; and Yusuke Kozaki. Occasionally, the live streams were also used to announce upcoming products and features for other Fire Emblem products, such as Fire Emblem Heroes and Fire Emblem Echoes: Shadows of Valentia.

The Cipher Frontier![dead link] was a roughly-monthly news column on the official website, hosted by the mascot characters Emma, Shade, Yuzu, Randal, Alice, Valjean, Niamh, and Poe. The columns provided similar news to the live streams, even summarizing their news in issues released after a live stream has aired, and frequently included the first looks at the packages for upcoming card series and for pieces of artwork from them. 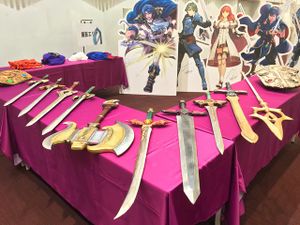 Several weapon replicas displayed on a table during a Cipher event.

For the purposes of promoting Cipher, Intelligent Systems had commissioned prop-maker Kenichi Hatori to produce replicas of prominent Fire Emblem weapons, which are frequently seen at events and on the live streams. The weapons he had produced replicas of include the Mystery and Awakening versions of Falchion and the Fire Emblem, the Binding Blade, Durandal, Armads, Tyrfing, Ragnell, and Yato.

Emma, Shade, Yuzu, and Randal star in a crossover with Echoes: Shadows of Valentia in the "Cipher Companions" downloadable content pack, which adds them to the game as playable units; the subsequent mascots are not featured, as they were introduced after the release of this DLC. Despite the card game remaining exclusive to Japan, this DLC was released in all regions.[1]