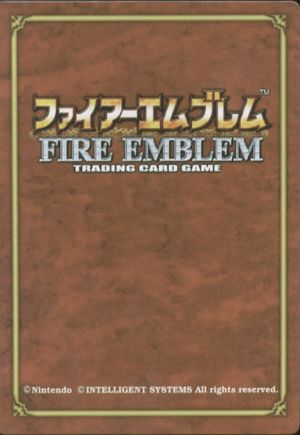 The back of all Fire Emblem TCG cards.

The Fire Emblem Trading Card Game was a collectible card game based on the characters and settings of the Fire Emblem series, created and published by NTT Publishing exclusively in Japan. The Trading Card game was published continuously from 2001 to 2004 across seven released series of cards, adapted from Fire Emblem: Mystery of the Emblem, Genealogy of the Holy War and Thracia 776; despite being published during their release period, the subsequent four games (The Binding Blade, The Blazing Blade, The Sacred Stones and Path of Radiance) are not represented at all in the TCG, and Fire Emblem Gaiden also lacks representation in the game.

Across most of the TCG's run, character art was provided by Katsuyoshi Koya, whose illustrations for the card game are to this day widely used to represent the casts of Mystery of the Emblem and Genealogy of the Holy War in other appearances. In Series 1, some card illustrations were also provided by Mayumi Hirota, the illustrator for Thracia 776 and the Treasure art book, and the Jugdral Anthology series feature artwork from a number of guest artists, including Yusuke Kozaki, who would later be the character designer for Fire Emblem Awakening and Fire Emblem Fates.

In 2015, eleven years after its publication came to an end, the TCG was succeeded by a new card game, Fire Emblem Cipher.

As of this time, the exact rules of the TCG are not available in the English-speaking fandom. 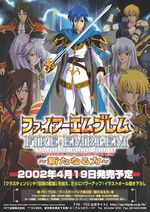 Eight "special packs" were released at some point during the TCG's lifetime, each themed after a Jugdrali nation or group. Each pack contained five cards, all of which were rare foil editions. The packs saw limited distribution at events.[2] Although the official website lists which characters were included with each pack, it is not known which of each character's cards were present in the packs, with the obvious exception of characters who had only one card. 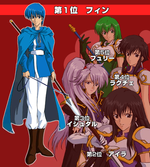