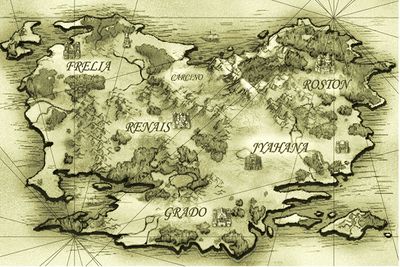 A map of Magvel, including the locations of major keeps.

Magvel (Japanese: マギ ヴァル MagiVal) is the continent on which Fire Emblem: The Sacred Stones takes place. It is the only game in the series that involves this continent in any way.

Magvel's current calendar starts at the original defeat of the Demon King exactly 803 years ago.

Little is known of the time before the current calendar, only that monsters were on their way to domination, and humanity was nearing the brink of extinction. In humanity's desperation it prayed to the heavens and was granted the five Sacred Stones. The Sacred Stones possessed the power to combat the hordes of monsters and the Demon King himself. The Demon King was defeated by the five heroes and sealed within the Sacred Stone that would eventually belong to Grado. Morva and the orphaned Myrrh were both present for this, with Morva himself aiding humanity. After the Demon King's defeat relative peace settled into the continent for the next 800 years.

Some time around the early 800s Lyon began his experiments with Grado's Sacred Stone. His experiments were for the betterment of humanity, however, they were also what would set Magvel awash in blood once again. In the year 802 Lyon's father, Vigarde had died. Lyon was mentally unable to cope with this, and pushed his experiments further, in hopes of reviving his father. This only made things worse, as Lyon's experiments allowed the Demon King to possess him. And, in the year 803, set Grado to war with every other country on the continent. 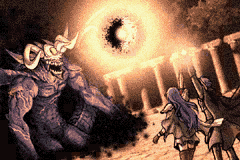 Grado and the Demon King were quite successful, as every Sacred Stone on Magvel was destroyed except for one. Rausten's stone remained intact. Eirika, Ephraim, and their companions assembled within Rausten to lead the final assault on Darkling Woods, and seal away the Demon King once again. After clashing with Riev and the now undead Morva they entered the Black Temple and killed Lyon, sealed the Demon King, and destroyed his body.

At the end of this conflict only a single Sacred Stone remained. After these events a disastrous earthquake struck Grado and sent much of it into the sea. Ephraim and Eirika chose to aid Grado in recovery.

The kingdom that the protagonists, Eirika and Ephraim come from. Renais is one of the several countries to possess a Sacred Stone. It was the first victim of Grado. Prior, Renais maintained good relations with every country on the continent. Renais is the only landlocked kingdom on Magvel, and is located between two mountain ranges.

Grado was founded, and named after, the hero Grado, and also possesses a Sacred Stone. It is the largest and most militarily competent kingdom on Magvel, and before the events of the game, shared excellent relations with Renais. Grado is the country that sets the events of the game into motion.

Frelia possesses a Sacred Stone as well. Frelia supports Renais from the start. Frelia has a cultural association with seafood. Innes and Tana are Frelian royalty that help Eirika and Ephraim on their quest.

Carcino is a young nation, and is run by a merchant council. Carcino does not possess a Sacred Stone. During the events of the game Carcio's council has an internal conflict, with some wishing to side with Grado and some not. Carcino is home to many merchants and a large port for trade with various countries.

Jehanna is also a country that possesses a Sacred Stone. It is ruled by queen Ismaire, as her husband is dead and her son absent. Jehanna is a desert nation, with Jehanna Hall being located near a small oasis. Jehanna is very well known for its various mercenary groups, with mercenaries from Jehanna featuring as both allies and enemies.

The theocracy of Rausten is a kingdom that possesses a Sacred Stone. Rausten is far more religious than the other countries, with the ruling class being clergy. Rausten was founded by Saint Latona.

Darkling Woods is the resting place of the Demon King's corpse. When the Demon King first fell, his flesh and blood corrupted the forest into what it is today. No humans inhabit the area, the only creatures that roam these woods are monsters. Myrrh and Morva also live here, watching over the Black Temple and the Demon King's remains. As the name suggests, Darkling Woods is comprised of dense woods, swamps, and mountainous terrain.