Prior to its release in 2004, Fire Emblem: The Sacred Stones – like most games – received previews in the Japanese gaming press and in other sources. Some of the screenshots of the game used in previews are comprised of preliminary content or data which is clearly different from the game's final form, especially in previews from earlier points in the game's development. 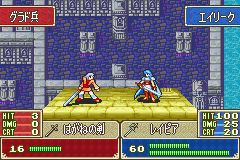 A largely incomplete pre-release build of the game was leaked from the Intelligent Systems FTP server in 2008 and subsequently widely distributed. In its degree of incompletion, it is uncertain to tell how much of what was in there was planned for the finished product at one time or another; interesting differences include different layouts for Chapters 5 and 6, significantly different portraits for some characters, and a small number of completely different names.

During Fire Emblem: The Sacred Stones's pre-release, like many other games, it was featured in various video game news outlets, including magazines.

Artwork for the Mauthe Doog and Elder Bael appear in some magazines, however the full size and high quality versions were never publicly released, artwork for the rest of the monster classes is not known to exist.

Curiously, the game's official Japanese website uses screenshots from what appears to be an earlier build of the game in its "Screenshot" pages; other pages which use screenshots, like the Unit page, use more recent screenshots in line with the final version.