At a village in Za'albul Marsh, Selena finds a dragonstone; Myrrh arrives ands asks that it be returned to her. Myrrh explains asks Selena if anyone she knows has changed, and explains what she knows of the dark forces threatening Magvel. Selena concludes that the dark forces Myrrh described have corrupted Emperor Vigarde, but Myrrh claims that there is no way to reverse this corruption. When Ephraim's army arrives, Selena allows Myrrh to return to Ephraim, then prepares her soldiers to fight his.

As the battle begins, Gerik and Tethys arrive on the battlefield, searching for Ephraim. They spot Myrrh, and believe she is lost; Myrrh is reticent to talk to them, and informs them that she is traveling with Ephraim before leaving them. Myrrh then finds Ephraim and apologizes for making him worry; Ephraim apologizes to her for being unable to protect her. Myrrh tells Ephraim that the soldiers are not bad people, and Ephraim assures her he will try to persuade them to cease fighting.

During the battle, Ephraim and Gerik can speak; Gerik tells Ephraim that Innes sent himself and Tethys, and Ephraim welcomes his aid. Ewan and Tethys can also talk; Tethys tells Ewan to get someplace safe during the battle, but Ewan insists on fighting, and leaves before Tethys can object. Additionally, Marisa and Gerik can talk; Gerik apologizes to Marisa for the trouble she went through at Taizel, and informs her they are working for Ephraim—Marisa is grateful to be working alongside him again.

Ephraim and Duessel can speak to Selena as they approach her. Ephraim asks Selena to withdraw, but she refuses; he criticizes her for following the orders of an emperor she knows to be deranged, but she resigns herself to the life of a knight. Selena and Duessel accept that they will have to fight each other, and Selena apologizes for calling him a traitor.

Once the enemy is routed, Ephraim returns Myrrh's dragonstone to her. Myrrh laments that Selena had to die, and Ephraim apologizes for being unable to avoid killing her. Ephraim resolves to continue on to Grado's capital to learn why the war had to start.

Stats with two figures separated by a ~ are presented as a range, representing stats that vary due to random growths. The figures to the left and right of the ~ are the stat's minimum and maximum possible values respectively.
Main article: Selena 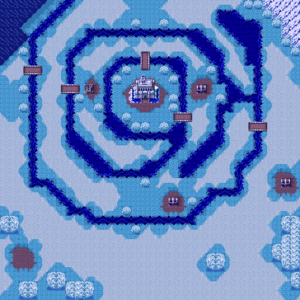