Joshua (Japanese: ヨシュア Jhosua) is the wayward prince of Jehanna, a desert country on the eastern edge of Magvel. He first appears in Chapter 5 of Fire Emblem: The Sacred Stones, in which he is hired as a mercenary by Grado sent to kill Natasha. If Natasha survives, she can speak with Joshua and end up recruiting him.

Joshua's behavior makes it obvious that he is a gambler, deciding his fate with a flip of the coin. He enjoys spending time in arenas as well. Joshua also mentions to Natasha in a support conversation that he may appear cynical.

Joshua first appears in the beginning of Chapter 5 as a mercenary hired by the Grado army to defeat Eirika's army. He speaks to Natasha, who quickly rushes past him. When Natasha speaks to him during the battle, he offers her to gamble. After losing the bet, he agrees to join her side and fight against Grado. 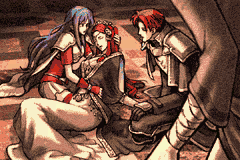 In Eirika's route, the group travels to Jehanna to warn them of the oncoming war. They arrive in Chapter 14, but as the battle ends, Queen Ismaire has already been fatally wounded. Surprisingly, she calls for Joshua, her son and apologizes for not being a good mother. He is revealed to be the prince of Jehanna and son of the queen, as they talk with her dying words. As she dies, she leaves him the sword Audhulma and the tome Excalibur, the two Sacred Twin relics of Jehanna.

Joshua reveals that he ran away in order to learn about the people of the world, to be worthy of the crown. Tired of palace life, ten years ago, he left the royal court under the guise of a gambling mercenary. However, he regrets this as he sits by his mother's side while she dies. Afterwards, he vows to take on the monarchy of Jehanna and defeat Grado along with Eirika of Renais, Innes of Frelia, and L'Arachel of Rausten.

In Ephraim's route, Caellach mentions that he and Joshua used to be friends and comrades during a brief conversation with Lyon in Chapter 15; if you have Joshua attack Caellach, he'll confirm that fact, and that they had parted ways two years ago; he'll also talk about how Caellach used to get into fights with him (Joshua) because of his (Caellach's) desire to become king; otherwise, Joshua's identity and backstory are not mentioned at all.

Joshua joins as a level 5 Myrmidon. His main claim to fame is a base C-rank in swords, allowing him to use the Killing Edge in his inventory. He also has a very high base speed of 14 and skill of 13, making him very accurate and very fast. Joshua is fast enough to double most enemies he faces, and with the Killing Edge, he can one-round with a crit.

Joshua's main disadvantage lies in his lack of 1-2 range, and also the lack of a mount. The Sacred Stones is a game that values mounts and 1-2 range, the cornerstones of good combat. Joshua has neither, which prevents him from countering ranged enemies on enemy phase. It also makes him fall behind the player's mounted frontline without rescue-dropping. Joshua offers nothing to compensate for these drawbacks. He is very good at using swords, but this means he can only fight well at 1-range. His base strength is alright, but his growth is mediocre, so he may not one-round without a crit. Joshua is competent enough at combat, but because of his limitations, he is not excellent.

Joshua's promotion choice is between Assassin and Swordmaster. Swordmaster has more obvious benefits. It grants better statistical bonuses and +40 weapon experience in swords. The weapon experience lets him use stronger swords and circumvent his average strength. Swordmaster also grants a crit chance increase, which helps Joshua one-round enemies. Assassin offers fewer stat increases, and no weapon experience in swords. To compensate for it, it grants Joshua the Silencer skill. The Silencer skill allows Joshua to kill non-boss enemies in one hit if it activates on a critical hit. That said, it is unreliable and the player should not count on it to activate. It should be treated more like a bonus than anything else. Assassins also gain more experience than other promoted classes. This is a more niche benefit, but it lets Joshua level up a few more times throughout the game if used full-time. Eventually, an Assassin Joshua will catch up to Swordmaster Joshua stat-wise.

Joshua: Tropical Gambler is only available at 5★ rarity.

Joshua: Resolute Tempest is only available at 5★ rarity.

Joshua says to Natasha in a support conversation that his personality makes him appear as if he is a cynical man. In support conversations with Artur, Innes, and Gerik it is shown Joshua has a tendency to cheat for victory in bets with shrewd trickery. He seems to show approval of Gerik in their A Support. In his support conversation with Natasha, he makes several bets to win her love. It is unknown whether or not Natasha won the bet with Joshua, as Joshua states: "I may cheat, but I never worm out of a bet. It's a rule of mine." It is plausible that he first showed affection for her and really didn't wish to harm her.

In a support conversation with Artur, he learns that Joshua has a hard time fighting mages, a common fault in myrmidons with their low resistance.

In Eirika's route, the group learns that Joshua is the prince of Jehanna. If Joshua is alive, Ismaire, Queen of Jehanna, has a brief conversation with Joshua in which he reveals that he left Jehanna to view the world as a man and not a prince; he states that his motives were to leave the castle walls to understand his people. He later states that he regrets not being with his mother. If he survives up until this point, the player will gain the sacred weapons of Jehanna, Audhulma and Excalibur, from her.

In Ephraim's route, the player learns that that Joshua had once been Caellach's best friend;[2] but if and when they meet again on opposite sides of the battlefield, Joshua is well aware that Caellach just wants to be king of Jehanna (and in fact had wanted to be king for a long time) and refuses to let Caellach manipulate him to that end. Caellach calls him "a cold fish," to which Joshua replies that Caellach is "still as shameless as ever."[3] Their conversation differs slightly depending on route.

Joshua, the Tempest King
Joshua returned to Jehanna and ruled over it as king. His skills as a leader had grown great, and Jehanna flourished as never before. He never outgrew his love of travel and games of chance.

Joshua and Gerik
After the war, Joshua challenged Gerik to a duel in hopes of pressing him to move to Jehanna. The match ended in a tie, but Gerik was impressed by Joshua's swagger. From that day forward, Gerik never left Joshua's side.

Joshua and Marisa
Joshua returned to Jehanna with Marisa, where she pledged service to the crown and became the top swordfighter in the land. Joshua still loved games of chance, but when it came to Marisa, she was ever the winner.

Joshua and Natasha
When Joshua returned to Jehanna, he took Natasha as his bride and claimed the throne as its rightful heir. Natasha was the perfect companion, and together, they carried the mighty desert nation to great glory.

Joshua appears as a sticker in Super Smash Bros. Brawl.

Joshua is featured on three cards in Fire Emblem Cipher.