Fomortiis (Japanese: フォデス, Fodeth[2]), is the final boss of Fire Emblem: The Sacred Stones who is usually referred as the Demon King. Eight hundred years before the events of the game, he was defeated by the Five Heroes, their Sacred Twin weapons and the Sacred Stones.

The Demon King is mentioned in the prologue as having been defeated and sealed away in the Sacred Stones. However, in Chapter 4, horrific monsters appear, the same as those from legends of old. They are described as having served the ancient Demon King, a sign of his resurrection.

Another mention of the Demon King occurs in Chapter 10 of Ephraim's route, in which Duessel speaks of a "Dark Stone" created by Prince Lyon and the other court mages, even more powerful than the Sacred Stones. Ephraim notes they had the power to defeat the Demon King, implying this Dark Stone's great might. In the next chapter, Riev appears on the phantom ship, which holds many monsters, and seems to be celebrating the Demon King's rebirth.

The Demon King's role is fully revealed late in the game: sometime before a year before the beginning of the game, Lyon began to research the properties of Grado's Sacred Stone, also known as the Fire Emblem, which had contained the sealed soul of the Demon King. However, a year before the start of the story, the Emperor Vigarde died to illness, leaving Lyon in a heavily panicked state. He began to work tirelessly to research the stone to find a way to revive him. Additionally, some time before the emperor's death, Lyon and the mages had seen a vision of the entire southern continent collapsing; a generally enormous catastrophe.

Somehow, the Stone was broken in two: the original Sacred Stone and the Dark Stone. The former was later destroyed by Lyon. At that moment, the Demon King called out to Lyon, convincing him that his wishes will be granted—the love of Eirika and the safety of his people. The Demon King begins to corrupt Lyon's body. He uses Lyon to control Vigarde and Grado's Imperial army, and sends them to destroy the rest of the Sacred Stones so that he can return to power without the threat of being sealed away once again.

By the end of the game, Lyon meets Eirika and Ephraim again, changed greatly. In Eirika's route, he convinces her to give him the stone, then abruptly changes back to his evil form and destroys it; in Ephraim's route, he freezes Ephraim in place and forcefully takes it. In the end, he travels to the Black Temple to finalize the Demon King's resurrection. Lyon dies and the Demon King appears.

First, his soul is trapped in the Sacred Stone of Rausten. However, his body still remains to be fought. The Demon King is the final boss of the game; only in this battle is he actually referred to as "Fomortiis", and only in his status screen. After he is defeated, peace returns to the continent of Magvel. The calamity predicted by Lyon and the other mages does happen, with a huge landslide killing thousands. Ephraim decides to travel there, to help Lyon's vision of a peaceful world, and to help the people.

Fomortiis is the game's thirtieth Mythic Hero, and was added to the game in a dedicated Mythic Hero update, made available for summoning as part of a summoning event alongside Gotoh released on January 27, 2023. Only one variation of Fomortiis is currently available in Heroes, based on his The Sacred Stones incarnation; he uses Lyon as his untransformed sprite.

Fomortiis additionally appears as a manifestation for the attacking animation of the corrupted Lyon's Blood Tome.

Fomortiis: Demon King is only available at 5★ rarity.

Fomortiis is a centuries-old demon whose ultimate goal is to be revived and retake the world under his control. During the story, he uses Lyon for this, and is shown to be very skilled at manipulation. In Eirika's route, he pretends to be back to normal "Lyon", and persuades Eirika into giving him the Sacred Stone, which he then destroys.[3] He has great contempt for mankind and seems to wish to destroy the world or somehow rule over it, mockingly telling Eirika and Ephraim's army to prepare for great catastrophe.[4] He is extremely cruel, keeping Lyon only barely alive inside the body just to watch as he kills Eirika.[5] A merciless demon, he is a truly evil villain.

Fomortiis does not have a death quote as the final boss. 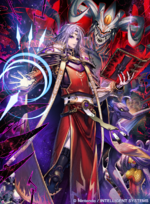 Artwork of Lyon, some monsters, and Fomortiis from Fire Emblem Cipher.

Fomortiis is featured on one card in Fire Emblem Cipher. Additionally, he has appeared in the background of three cards, Ephraim's and Eirika's SR combined artwork cards and Lyon's R card, all from set 11.