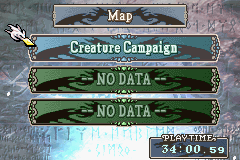 Creating a Creature Campaign save file in The Sacred Stones.

The Creature Campaign (Japanese: 大陸の魔物退治 Continental Monster Eradication) is a post-game gameplay mode which is available in Fire Emblem: The Sacred Stones. The player can choose to continue Epilogue save files in Creature Campaign mode through the Extras menu.

In Creature Campaign, the player wanders the completed world map and fights in the Tower of Valni, Lagdou Ruins, and various monster Skirmishes, using all their units and items from the cleared save file. The player has access to all of the game's shops on the world map to replenish their supplies as they go. The mode has no ending at all and there is no clear goal, giving the player freedom to do whatever they want with the mode: among other activities, they can aim for time and kill records in the Tower and Ruins, or they can focus on grinding to maximize the levels of all of their units. Secret shops are available allowing the player army to infinitely collect items, allowing every unit to have their stats maxed if the player is interested in doing so.

During Creature Campaign mode, three skirmishes will spawn on the world map at the beginning of the mode and every time the Tower of Valni or Lagdou Ruins are visited. Skirmishes can take place on every skirmish location from the main game.