Japanese to US changes

The difficulty settings were adjusted for every map. These setting affect the effective level of enemy units, and, as a result, give enemies a bonus to their stats or a penalty to their stats without changing their actual levels.

Additionally, the formula for applying the effective level penalties for normal mode and easy mode was changed between the Japanese and localized versions, making it so that the enemy level up routine is skipped if the effective level ends up being less than or equal to the unit's base level (which is usually 1 for generic units). However, this introduces a bug that makes it so that the 9 level bonus that is given to promoted units in easy and normal mode is skipped as well, making them weaker as a result.[1]

Fomortiis summons stronger monsters in the localization of the game.

Note: The tables lists each character's base stats in the Japanese version +/- the adjustment made in the English version. Amelia's starting Level in Eirika's Chapter 13 was reduced from 5 to 4 and Cormag's Level 11 stats are rounded to the nearest whole number. Boss stats are those on normal mode.

Note: The table lists the character’s growth rates in the Japanese version +/- the adjustment made in the English version. 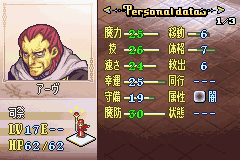 Screenshot of Riev's Chapter 20 appearance in the Japanese release of The Sacred Stones. 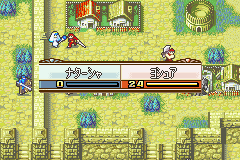 Since no distribution events were ever run for US or European releases, the following items became completely inaccessible in gameplay. All of them can still be accessed through cheat devices and still function properly.

The localization added the health and safety warning upon booting up the game.

US to European changes

Unless otherwise stated, all changes made between the Japanese and US releases are retained in the European version, excluding names.