Innes (pronounced /⁠ˈɪnɪs⁠/[key][2]; Japanese: ヒーニアス Heanius) is the prince of Frelia, son of King Hayden and elder brother of Tana. He is a leader of Frelia's army and is a sniper of great skill. He is shown to be able to handle himself and to sacrifice himself for others, saying that he will be a distraction while Gerik and Tethys escape. Although he is sometimes arrogant and can be thought of distant, he does care for those close to him.

Innes spends the first part of the game on the war front, battling Grado. He returns to Frelia between Chapter 8 and Chapter 9 and meets with Eirika and Ephraim. During a war council, they decide to split up, with Innes going to Jehanna through Carcino. As he travels, he hires the mercenaries Gerik and Tethys to help him on his journey.

In Eirika's route, he is cornered by Carcinan troops under Elder Pablo who have turned against Frelia. Trapped in a fortress, he tells Gerik and Tethys to escape while he will escape himself. However, Eirika arrives and helps him. Throughout the rest of the game, he advises Eirika on several affairs.

In Ephraim's route, he sends Gerik and Tethys to help Ephraim, and presumably, Eirika helps him in Carcino. He then appears in Chapter 15 along with Eirika and Saleh. Late in the game, he provides Eirika and Ephraim with Nidhogg and Vidofnir, the Sacred Twin weapons of Frelia.

Innes joins Eirika's army during the second chapter of her route and is the first pre-promoted unit the player will have access to after Seth. On Ephraim's route, he instead joins along with Eirika during the reunion in Chapter 15. Like most pre-promoted units, Innes possesses respectable base stats and a starting A-rank in bows. Additionally, his growths in every stat besides defense and resistance are on par with the rest of the player's units, enabling Innes to remain relevant until the end of the main campaign. His decent strength and bow rank will enable him to easily dispatch most flying enemies. He is also an excellent candidate for wielding the Nidhogg once it is acquired as he will likely be one of the few units close to an S-rank in bows by that point. With the legendary bow, he can provide ranged fire on tough enemies like end-game monsters or even the final boss.

In comparison, Innes is arguably much better than Neimi, the game's only other archer. Neimi's level twenty stats are slightly higher than Innes's, but she requires substantially more investment to reach that level, and will likely not have done so by Innes's join time. Furthermore, Innes's 9 constitution to Neimi's 5 (6 as a Sniper) enables him to more easily wield Silver and Steel Bows that slow Neimi down. However, Neimi is capable of promoting to the Ranger class, giving her access to a horse and swords. All in all, if the player has invested ten or more levels into Neimi by the time Innes joins, she can be the better unit, but her weak start might cause many players to give up on her, while Innes joins already strong. Her capacity to overtake Innes is more pronounced on Ephraim's route, where he joins much later and gives her more time to catch up.

Innes's main weakness is the inability of all archers to fight at melee range. This restricts his positioning, cuts down on his damage output during the enemy phase, and causes most melee enemies to prioritize attacking him. Because of this weakness, many players may opt to not use Innes, preferring instead to use magic, Javelins, and Hand Axes for ranged utility.

Overall, Innes is a decent pre-promote who can be very useful if the player takes his archer weakness into account. With planning and map awareness Innes is more than capable of being used as a one target "delete button" in the player phase. 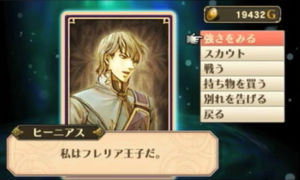 "I am the prince of Frelia."

On March 14th, 2012, Nintendo released a video on the Wii's Nintendo Channel service, which they later also placed on the official Japanese website for Awakening. This video depicted many things, among them confirmation of returning characters from other games in the Fire Emblem series in the form of downloadable content delivered via SpotPass. In this release, Innes was confirmed as a returning character along with Ayra from Genealogy of the Holy War and Clair of Gaiden.[3] Innes appears in the The Sacred Stones character set.

Innes is also present in Awakening's DLC as an enemy in Smash Brethren 2 and 3.

As with several other legacy characters in Awakening, there is a unique weapon named for Innes available through the Barracks or event tiles: Innes' Bow.

Like all male bonus units in Awakening, Innes has access to all base class and advanced class skills available to standard male units.

Innes: Regal Strategician is only available at 5★ rarity.

Innes: Flawless Form is only available at 5★ rarity.

Innes is a quite serious man who always tries to improve his skill. He has great pride in his skill with the bow and in his title as prince of Frelia and has great aspirations for the nation when he becomes king. Since he is of royalty, he believes that he cannot show any flaws;[4] therefore, he often comes off as callous or extremely austere. However, he genuinely cares about the others in the army and those who are close to him, such as Tana. He is very persistent at many tasks, and according to his sister Tana, he is always trying to be the best at everything.[5]

Innes is the son of Hayden, king of Frelia, making him the prince. He and his sister Tana are often fighting with each other. However, he truly does care about her. When he and Tana were young, Tana lost the crown; to help his sister, Innes found the crown after much searching and pretended that he had taken it to see how it looked while he was wearing it.[6]He thinks of Ephraim, prince of Renais, as a rival and very often competes with him at many things.

Innes has great skill in archery, explained in several of his support conversations. At the king's birthday ceremony, he was able to shoot three arrows at once and hit three different targets.[7] According to Moulder, over ten years ago, he was just a child, making him somewhere in his late teens to early adulthood.[8] At this age, he was able to best a famous visiting archer at an archery competition. When the other archer moved the target back, Innes shot an arrow up in the air in an arc to a bull's-eye on the target.[9]

Innes, King and Strategician
As time went on, he succeeded his father, Hayden, as king of Frelia. His resourcefulness and tactical prowess helped him build a court of loyal vassals that served to lead the country to greater prosperity.

Innes and Vanessa
At Innes's request, Vanessa moved into Castle Frelia where she continued her duties as a knight of the realm. Thereafter, they had a child and lived happily with the blessing of all around them.

Innes and Eirika
After the reconstruction of Renais, Innes challenged Ephraim to a duel. The match ended in a tie. After the fight, Eirika acknowledged her love for Innes, and the two were wed with Ephraim's blessings.

Innes is featured on five cards in Fire Emblem Cipher.

One of these cards' quotes and two further cards' epithet are still in raw, untranslated Japanese; these needs translation.