Nagi (Japanese: ナギ Nagi) is a playable Manakete appearing in Fire Emblem: Shadow Dragon and Fire Emblem: New Mystery of the Emblem. In both games that she appears in, there is little solid information about Nagi. However it is heavily implied, both in the dialogue and in the game data, that Nagi's true identity is Naga, the Divine Dragon King of legend. 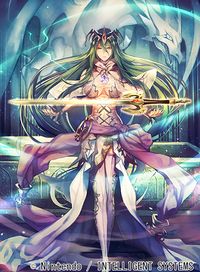 Nagi with another Falchion, as depicted in Fire Emblem Cipher.

Nagi's primary gameplay purpose is to serve as a failsafe for the player. She is only recruited if Marth has failed to collect Falchion, and Tiki has either died or not been recruited. With her Divine Dragon power, and her possession of another Falchion, she is Marth's saving grace.

She first appears in Chapter 24x if the player completes Chapter 24 without Tiki and Falchion in their possession (although an exploit can be used to keep Falchion). If this occurs, Gotoh warns Marth that he does not possess the power to defeat Medeus and advises him to seek help from the guardian of a tower located in another realm. At the top of the tower, Marth meets Nagi, who agrees to join Marth's cause and rewards him with a weaker version of the original Falchion. During the battle with Medeus, Medeus remarks that he knows Nagi, but their relationship is unclear.[1] She is also apparently familiar with Gotoh.[2]

Like in Shadow Dragon, Nagi serves as a powerful lategame unit to assist Marth in the last leg of his journey.

Nagi comes to Marth's aid once again, joining Marth's army of her own accord in Chapter 22, but Marth does not recognize her and only finds her familiar,[3] possibly indicating Nagi's recruitment in Shadow Dragon did not occur.

Nagi is the last character to join in New Mystery. Her bases are not particularly high for such a late join time and her high growths do not matter much this late into the game, but her Divinestone makes up for those weaknesses. Because of her Divinestone she is one of the best dragonkillers in the last few chapters of the game, she cannot one shot the on Lunatic and Lunatic reverse so it is recommended to give her tow energy drops or chip enemy dragons with a longbow sniper to give Nagi the ability to finish them off. Nagi is also fairly bulky, while her low speed ends up making her get doubled and one rounded by most enemies at this point in the game, she has high enough physical durability to survive a single enemy attack and has a very high resistance making her good against magic enemies, notably the Lewyn sword swordmaster in chapter 22. Overall, Nagi is a good endgame filler unit that serves as fail-safe if you have not trained up Tiki and need some additional firepower against the large number of powerful enemy dragons.

Nagi is one of the characters added to the game in the Where It Began update, and became available for summoning by players on September 19, 2019. Only one variation of Nagi is currently available in Heroes, based on her New Mystery of the Emblem incarnation.

Nagi: Dragon Avatar is only available at 5★ rarity.

Nagi appears to have lost her memories.[4] She speaks little, and when she does she seems to pause a lot, much like Sophia. She appears to have a benevolent, if quiet nature.

Nagi, Dragon Ruler
Marth would have thanked Nagi after Medeus fell, but there was no one there to thank. Had she returned home? None ever knew.

Nagi, Dragon King's Avatar
After the war, Nagi vanished as suddenly as she appeared. History holds no records of her ever appearing again.

Nagi is featured on one card in Fire Emblem Cipher.