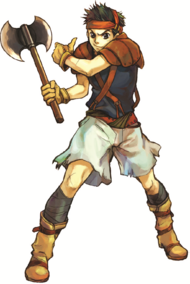 Humans (Japanese: 人間 human), also known as beorc in Tellius, and occasionally known collectively as mankind, men or humanity, are the most common sentient race in the Fire Emblem series, mirroring humans in real life. Despite possessing weaker physical abilities compared to most races in the series, humans are very prosperous due to their high birth-rate, ability to craft tools and weapons and use of language.

Port Warren, a human-occupied town located in the Kingdom of Archanea.

Humans are notably very social creatures, and although there are individual exceptions, the vast majority of humans typically come together to establish communities and live together in social groups; these groups can range in size from small villages or tribes to enormous nation-states. Humans often derive a sense of identity and purpose from the communities they are part of, and frequently express determination to protect and even die for their community. Indeed, this sense of nationalistic pride is often the source of conflict between nations.

Humans often maintain a strict hierarchy within their society, through which they seek to maintain order and security. Typically in the Fire Emblem series, human nations are hereditary monarchies where a single royal family rules over the population with the support of a system of nobility, where other humans are given prestigeous ranks and maintain the state's affairs in detail on behalf of the king or queen; such nations are called kingdoms, or occasionally empires. Needless to say, this system is not foolproof, as the royal family often has absolute power over their lands and a sinister or corrupt king or queen could potentially exploit and abuse their people for their own gain. As a result, there are societies which are deliberately built to avoid the problems of monarchy, such as republics like Carcino where the common people both rule and keep their rulers accountable; the Sacae region in Elibe, whose people form small, nomadic tribes headed by an ordinary person in the role of chieftain; or simple, closely-knit villages which are isolated from the affairs of the rest of the kingdom's territory, such as Caer Pelyn.

The majority of human societies in Fire Emblem are loosely based on medieval European society, and so in terms of social structure, attire and aesthetics strongly reflect these European influences. However, there are several exceptions: notably, the Sacaen tribes draw their influence from Mongolian culture, and both Chon'sin and Hoshido instead reflect a strong Japanese influence. 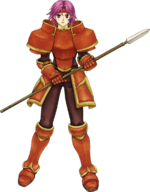 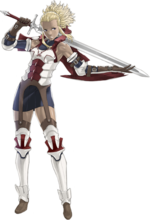 The humans of the Fire Emblem series, for the most part, look identical to their real-world counterparts. A key difference is that in Fire Emblem, humans are very frequently seen with a wide range of hair colors which are naturally impossible in real humans, including purple, blue, green, and countless other colors. Similarly, a wide variety of unusual eye colors are also present. Both hair and eye colors are frequently used to convey a character's status in some form; for instance, blue hair is frequently seen on the games' main protagonists, and red eyes often denote something unusual, often related to Manaketes. Of course, this is not always the case; a large number of non-protagonist characters also have blue hair, and Raven has red eyes but is an entirely ordinary human.

One area in which Fire Emblem humans do not diverge significantly from real life is skin color, as few to no Fire Emblem humans have skin colors which do not match a real skin color. However, pale-skinned people are the overwhelming majority, and the number of dark-skinned characters remains extremely low.

Compared to other sentient races, humans have an extremely high rate of birth, which is a key factor in their wide distribution and dominance; indeed, Jahn believed that the sheer number of humans and the speed at which they were born and grew up was a key factor in their ability to successfully fight dragons in the Scouring.[1] As in real life, after coupling with a man, human women give live birth to one (or rarely, two) baby(ies) after nine months of pregnancy. The parents raise and protect their children for at least fifteen to eighteen years, after which they are regarded as adults and take on responsibilities of their own. The average human life span in Fire Emblem is similar to that of real humans; although a human will on average live to the age of sixty to eighty years old, conflicts and diseases often ensure much earlier deaths than this. Very few humans live beyond one hundred years, and for those who do, such as Athos and Jeralt, it is often the result of magical power.[2]

Although it is highly uncommon, humans are able to reproduce with Manaketes, taguel, wolfskin, and kitsune. In the case of Manaketes, the resulting child looks mostly human, perhaps sporting the trademark pointed ears of Manaketes, but their powers are more in line with those of Manaketes. A half-human, half-Manakete will live for centuries, though still not as long as full-blooded Manaketes do,[3] but whether or not they will have the ability to assume dragon form seems to vary; the half-Manaketes Ninian, Nils and Nah have the abilitiy, but fellow half-Manakete Sophia does not. On the other hand, only two children resulting from the union of humans and taguel are known: Yarne and Morgan. Both retain the full ability to transform into beast form, but both inherited different amounts of a taguel's physical traits (Yarne inherited all of them, while Morgan inherited none). Other effects on their biology and lifespan are unknown. Wolfskin and kitsune hybrids function like taguel hybrids; they retain full transformation ability, but not always the physical traits (ears, tail) in human form. Three children resulting from kitsune-relationship hybrids are known: Selkie, Shigure, and Kana. Velouria is the result of a wolfskin-human relationship, while Shigure and Kana can also come from this form. However, Shigure and Kana lack wolfskin or kitsune features. 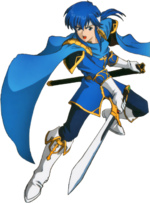 Seliph, a human who fights by using a sword as his weapon.

While other, more powerful species rely on their own natural abilities to fight, humans are relatively weak in and of themselves and have no claws or breath to succeed in battle with. Instead, humans rely on their creativity and resourcefulness to master weapons, using them in place of natural defenses in order to fight. In Fire Emblem, physical human weapons remain in a medieval state and are primarily limited to four types: swords, axes, lances, and bows. Though there are some variants that serve the same general purpose, for instance, the kingdom of Hoshido use naginata, which function like lances, katana, special types of swords, and kanabō, club like weapons parallel to the axe.

Another factor in the combat success of humans is their tendency to fight in large, organized groups under the guidance of a single commander. This comes in many forms, ranging from the vast, rigidly controlled structure of armies, to smaller, relatively lax bands of mercenaries. Through co-operation in great numbers, humans are able to successfully challenge even the mightiest of creatures, although they spend most of their time engaging each other in wars. Humans are also notable for their ability to tame and domesticate animals to meet their needs, most notably using horses, wyverns, griffons and pegasi as pack animals and steeds in battle.

Unlike real humans, Fire Emblem humans can learn to wield magic, for both offensive and defensive purposes. All humans have the ability to learn a bit of magic, but only a small few have enough natural talent in the art to follow through on it and become full-fledged Mages, with no amount of practice being able to bridge the gap for the untalented.[4]

Relationships with other races 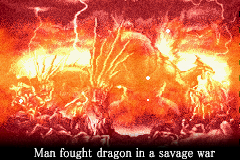 The Scouring, an infamous result of human attitudes toward other races.

Human relations with other sentient species have, on average, been extremely rocky, often of the humans' own volition. Although the bulk of human conflicts are spent fighting other humans, it is far from uncommon for other races to be the subject of organized violence from humans.

In particular, humans have a turbulent history with dragons, or their Manakete forms, and have frequently been the instigators of bitter conflicts against them. The two most prominent examples of this occurred in Archanea and Elibe: in the former, Manaketes were the subject of cruel persecution from power-drunk humans following the decay of the ancient dragonkin civilization and the rise of humanity in its place, which in turn led to the rise of Medeus and his Dolhr Empire's quest for vengeance against humans;[5] and in the latter, a once peaceful co-existence was broken by humans when they engaged dragons in a genocidal war known as the Scouring, which ultimately resulted in the banishment of almost all dragons from Elibe. In some cases, the feeling is mutual; many Archanean dragons were contemptuous of humans and their sheer inferiority, as exemplified by the majority of Dragon tribes, such as the earth dragons, refusing to become anything like humans out of their pride as Dragons despite the mental danger it posed, and who later posed a grave unprovoked threat to humans when they degenerated into a feral state. [6]

At the same time, however, these same civilizations (and others) also tend to express a reverence for dragons in the context of mythology. Dragons figure heavily in the myths and legends of various cultures, often telling stories of benevolent dragons who aided humanity in the past, such as one story told in Ilia about an ice dragon,[7] or the reverence which the people of Caer Pelyn hold for Manaketes. Individual dragons are often hailed as gods with powers and technologies beyond the grasp of humans, especially in Archanea and Jugdral, although in these and most other cases, the majority of human worshippers regard them as general humanoid gods without realizing their true dragon nature. Additionally, in at least Archanea and Jugdral, evidence suggests that human magic actually outright originated with the dragonkin and was given and taught to humanity through various avenues over the millennia.[8]

In Ylisse-era Archanea, taguel are claimed to hold an even worse history with humans. During Chrom's era, the taguel have been hunted for sport by humans to the point of extinction.

Various dark entities, such as Duma and Fomortiis, also threaten humanity, primarily through the hordes of monsters that serve them. In their many forms, some of which even deriving from human corpses, even the weakest monsters are more powerful than an ordinary human and are unambiguously hostile toward them, posing a significant threat to human populations.