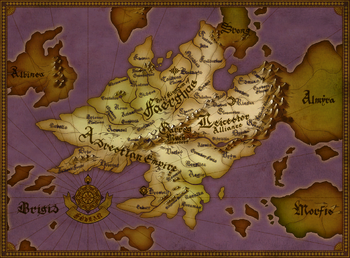 A map of Fódlan with labeled locations. 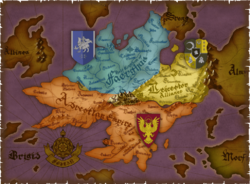 A map of Fódlan with the three primary powers highlighted.

In the ages before the foundation of the Adrestian Empire, there took place a legend involving ten heroes that fought against a man known as the Liberation King Nemesis. Afterwards, the Church of Seiros is said to have aided in establishing the Adrestian Empire.[2] At its founding, the Empire held dominion across the entire continent.

Adrestia's grip on the land did not last. At some point, the Holy Kingdom of Faerghus and the Leicester Alliance split into their own domains, severing themselves from Adrestia; this plunged continent into war and bloodshed.[3]

Now, dominion of Fódlan remains split by those three powers. The Church of Seiros continues to be the primary faith of Fódlan, and exercises great power over the continent and its people.[4] The Church uses its great influence to maintain peace between the powers.[3][5]

Located in the neutral mountain range at the center of the continent is the Garreg Mach Monastery, which houses the Church of Seiros and the Officers Academy. At the Officers Academy there are three houses, the Black Eagles, Blue Lions, and Golden Deer. Students from all three powers attend the academy.

The Adrestian Empire in the modern day comprises the southern half of Fódlan and has endured for the past 1,000 years;[6] it once held dominion of the entire continent.[3] The imperial bloodline in Adrestia carries the crest of Seiros in its veins. While Adrestia has lost its absolute dominion of the mainlaind, the kingdom of Brigid, situated on the archipelago to the west of Adrestia, is subservient to it.

Edelgard von Hresvelg, heiress to the empire, and the members of the Black Eagles house hail from here.

The Holy Kingdom of Faerghus is located in the north and is ruled by the royal family and its loyal knights.[7]

Prince Dimitri Alexandre Blaiddyd and the members of the Blue Lions house hail from this frigid region.

The Leicester Alliance is a league of nobles located in the east that bend their knee to neither king nor emperor.[8]

Claude von Riegan, leader-to-be of the alliance, and members of the Golden Deer house hail from this region.