Lilina (Japanese: リリーナ Lilina) is the daughter of Hector and best friends with Roy. She made a brief appearance at the end of Fire Emblem: The Blazing Blade with Roy. Her starting class is a mage, and she has a custom battle sprite. She is first playable at the beginning of Chapter 8 in Fire Emblem: The Binding Blade.

Lilina and Roy at age ten with their parents.

Lilina was born in the year 985, five years after Hector defeated Nergal at the Dragon's Gate. Lilina met Roy when they were both ten years old during the latter's visit to Ostia with his father, Eliwood.

The Disturbance of Bern

Lilina and Roy studied together in Ostia under the tutelage of General Cecilia of Etruria. Around the time when the Disturbance of Bern began, she travelled to Pherae to pay respects for Eliwood, who had fallen ill. A few days later, Castle Pherae was under attack by Damas and his bandit group, trapping her, alongside Eliwood and Merlinus, inside, until Roy, his vassals, and Bors came to the rescue. After Damas was defeated, Lilina said to Eliwood that she would join Roy, thinking that her magic could be of help to him, but Eliwood declined, ordering her to return to Ostia and assume the throne of Ostia while her father is absent. Before going home, she allowed her vassal, Bors, to travel with Roy.

Later in Ostia, Lilina is captured by rebels led by General Legance, who occupy the city; Roy challenged the rebellion and, for the first time in the city's history, successfully invaded Castle Ostia to defeat Legance. If Lilina survived the battle, Roy tells her about the death of Hector in Araphen; Lilina then shows Roy the hiding place of Durandal, and accompanies him for the remainder of his journey.

At the end of the game, if Lilina is still alive, she returns to Ostia to rebuild. If she unlocked an A support with Roy, the two marry and unite Lycia into a single kingdom. Regardless of what ending she attains, she succeeds her late father as the new Marquess of Ostia, and, in turn, becomes Queen of Lycia.

Lilina is if first met out of battle in Chapter 1 before being seen again and recruited in Chapter 8. Her survival in Chapter 8 is required to access its sidequest to obtain Durandal and by extension access the true ending.

Additionally, Lilina is playable in the Tutorial.

Lilina joins in Chapter 8 at level 1. She has poor durability and cannot survive most attacks; her base stats are low and she struggles to contribute early on, but her incredibly high 75% magic growth can enable her to deal significant magic damage if trained and leveled up. Lilina's survival during her joining chapter is required in order to access its sidequest and obtain Durandal, and thus to access the true ending. Though she is not required for the true ending beyond Chapter 8, Lilina is required to recruit Gonzalez in Chapter 10 (north route or south route) and Garret in Chapter 15.

Lilina has generally low base stats. Lilina's base magic is low, so her damage output is unimpressive. Her speed is too low to double, and she will get doubled herself by most enemies; as her HP and defense are also low, she can be one-rounded by enemies fast enough to double her, or those using brave weapons. Her skill is low and her growth is bad at 20%, and while her luck growth is good and anima tomes have high accuracy, it will hinder her when using any tome except Fire; even after promotion, she can struggle against enemies on avoid-boosting terrain, particularly bosses or enemies that are very fast, and her 35% speed growth is quite shaky and inconsistent when it comes to make her fast enough to double. These flaws are mitigated only after long-term training and investment. Training Lilina can be beneficial to the experience ranking, but can be harmful to the tactics and combat rankings.

When trained, Lilina will likely have a very high magic stat and cap it. Most enemies in The Binding Blade—even on Hard mode—have fairly low resistance, which Lilina can deal significant damage against; she can, for example, deal sizable damage to manaketes even without dealing bonus damage. This power can be strengthened with powerful tomes such as Forblaze or supports from units with Fire, Wind, or Anima affinities; while increasing Lilina's anima level and growing her supports may take some time, dedicating experience and resources to Lilina already encourage a slower pace.

Once she is promoted to Sage, Lilina will be able to use staves. She will likely heal more HP than most other staff users, but starts with E in staves, and will take significant effort—in addition to what was needed for her to reach promotion—to increase her staff level to the point where she can use stronger staves such as Physic or Berserk. 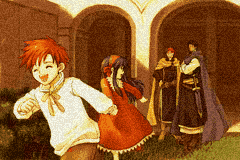 Lilina and Roy running off to play.

A ten-year-old Lilina appears in the extended epilogue of the Japanese and North American releases of Fire Emblem: The Blazing Blade. Hector introduces her to Roy and Eliwood, and she and Roy play together afterwards. As the extended epilogue was removed from the PAL release she does not appear directly in the game in PAL regions. She is, however, referenced by Hector in his support conversations with Eliwood (along with Roy).[4]

Like all female bonus units in Awakening, Lilina has access to all base class and advanced class skills available to standard female units.

While not directly controllable, a young version of Lilina, based on her extended epilogue appearance in The Blazing Blade, appears together with a Halloween duo variant of her father, Hector, that was first made available on October 9th, 2019.

Lilina: Blush of Youth is only available at 5★ rarity.

Lilina: Beachside Bloom is only available at 5★ rarity.

Lilina: Firelight Leader is only available at 5★ rarity.

Lilina: Beaming Bride is only available at 5★ rarity.

Lilina is a very kindhearted individual, who will often put the consideration of others before her own interests; she demonstrates considerable empathy and compassion towards others.[5] Although she is of great social stature, she is not afraid to speak candidly to those below her.[6] Like her father, she inspires loyalty in many of those around her.[7][8] Lilina often shows concern for Roy;[9] in some dialogue, she shows romantic feelings for Roy,[10][11][12] though in others seems to be embarrased about it.[13]

Lilina, though she is the heir to Ostia, is still unsure of herself. Cecilia acts as a mentor to Lilina, training her not only in magic but also giving her advice in how to be a leader.

Lilina - Delightful Noble
After returning home, Lilina became the marquess of Ostia and dedicated her time to rebuilding her land. She later rebuilt and led the Lycian League to create the Kingdom of Lycia, a peaceful nation blessed with prosperity and harmony.

Lilina and Roy
After returning home, Lilina became the marquess of Ostia, and married Roy a short while later. Together, Roy and Lilina united the Lycian League and created the Kingdom of Lycia, a peaceful nation blessed with prosperity and harmony.

Fire Emblem Characters: The Binding Blade and The Blazing Blade

Lilina's artwork from The Binding Blade is featured in a file in the Fire Emblem Characters book, alongside details regarding herself and her role in the game's story. Her younger self from The Blazing Blade is not given a file. Despite the fact that Lilina is confirmed to be in the same age as Roy, thus making her 15, she remains listed as being estimated in her teens, as the extended epilogue from The Blazing Blade was not taken into account.

Lilina appears as a sticker in Super Smash Bros. Brawl.

Lilina is featured on thirteen cards in Fire Emblem Cipher.

Five of the below cards' epithets are still in raw, untranslated Japanese; these need translation.

Lilina appears as an Advanced Attack-type spirit in Super Smash Bros. Ultimate, using her art from Fire Emblem: The Binding Blade. When equipped to an AI character, Lilina grants increased damage to fire- and explosion-based attacks. When equipped to a player character, she grants two support spirit slots and increased damage to fire-based attacks. 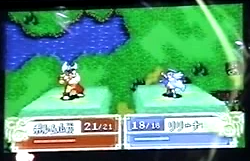 Screenshot from the Space World 2001 trailer, which has Lilina playable in Chapter 1.