Duma (Japanese: ドーマ Doma) is one of the two gods of Valentia, also known as the War Father (Japanese: 戦神 war god). He is the brother of the Earth Mother Mila, and the patron deity of the nation of Rigel. In ancient times, Valentia was split into two nations in a pact between the two conflicting gods, and Duma's beliefs in strength above all else shaped Rigel into a powerful and heartless empire.

In Valentia's distant past, Duma once dwelled on the continent in exile along with Mila, but he grew to hate humanity's descent into corruption, and the two siblings came into conflict over their different views of an ideal world. Duma and Mila engaged in a long, violent struggle to determine whose ideals should shape Valentia, dragging Valentia into an age of darkness. The struggle eventually came to an end through a pact the two made, dividing the land in two, giving each sibling one half to rule as they saw fit. Duma took the northern half, which became the kingdom of Rigel, and his belief that power was everything guided it into becoming a harsh, militaristic empire with little room for kindness.[1]

Thousands of years later, in the year 604, Duma was involved in the instigation of an all-out war between Zofia and Rigel by providing Falchion to Rigel's Emperor Rudolf in order to imprison Mila. Following this, Zofia fell to a coup by its Chancellor Desaix, then to a successful invasion from Rigel. In response to these actions, Alm led a revolutionary army to defeat Rigel while Celica set out to find what happened to Mila.

Their efforts culminated with Alm leading an assault on Duma's Altar, in which Celica was being imprisoned by the priest Jedah. The two engaged Duma and his force of priests and monster servants in battle, which ended with Alm defeating Duma using Falchion. With this defeat, Duma entrusted the welfare of Valentia and its people to Alm and Celica, and bade them to rule more justly and balanced than he or Mila ever did.

Thousands of years after his defeat at Alm's hands, the site of Duma's resting place, somewhere in Valentia's south-west, became a volcano known as the Demon's Ingle, and was the site of Chrom's battle with Yen'fay. Notably, the Demon's Ingle is not anywhere near Duma's actual place of defeat. Fire Emblem Echoes: Shadows of Valentia's ending clarifies that Alm and Celica moved his and Mila's remains.

Duma is the final boss of Fire Emblem Gaiden, confronted at Duma's Altar in Act 5. All units are capable of fighting Duma until his HP has been reduced to 52 or less, after which point he cannot be damaged any further by anything except Alm's Falchion or the Nosferatu spell. After this point, units without these who attempt to attack him will do nothing at all and the battle text will say that "their attack was sealed", and leave themselves open to be counter-attacked by Duma.

Duma reprises his role as the final boss of Act 5.

He also appears in the final Memory Prism, which shows him and his sister ending the war between them and forging their divine accord.

There are two different variations of Duma available to Heroes, both of which are tied to his storyline appearance in Echoes: Shadows of Awakening. The normal variations of Duma is the game's second Mythic Hero, and as such was added to the game in a dedicated Mythic Hero update, and was made available for summoning as part of a summoning event released on January 31, 2018. A Halloween variaton of Duma was made available on October 6, 2022 as part of the summoning event surrounding the launch of the Divine Harvest update; this variation is a Duo Hero, teamed up with Mila.

Duma: God of Strength is only available at 5★ rarity.

Duma: Strength and Love is only available at 5★ rarity.

Despite his reputation as a fell god, Duma may not be inherently antagonistic, but he nonetheless came into conflict with his sister goddess Mila over their mutal conviction in their respective viewpoints. Duma strongly adhered to a philosophy of power and military prowess as being the ideal path for mankind, incompatible with Mila's devotion to pacifism.[2] This schism led to a truce in which they divided Valentia into two nations to rule as they each saw fit, and Duma's philosophy took root in his nation Rigel. However, Duma's heavy involvement in Rigel's direction led to the nation practicing his philosophy to an unhealthy extreme, soon becoming a strict and rigid militant regime.[3]

Duma appears to have been aware of the need to end his and Mila's influences on their nations and for Valentia to reach a more balanced state of life. It was he who provided Rigel's Emperor Rudolf with Falchion to seal Mila away,[4] an act which—as planned by Rudolf—led directly to Alm and Celica's uprising against Rigel and Duma and reunification of Valentia. 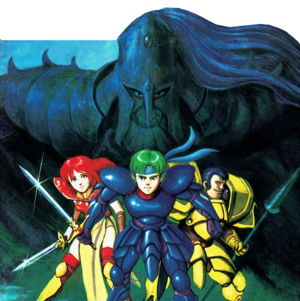