Medeus (Japanese: メディウス Mediuth) was an earth dragon king and the only known earth dragon to have willingly become a Manakete. He was the first and only ruler of the Dolhr Empire, reviled and feared across Archanea as the tyrannical Shadow Dragon (Japanese: 暗黒竜 Dark Dragon). His years of watching over his captured brethren on behalf of the divine dragon Naga deeply embittered him against humanity and their cruelty toward his fellow Manaketes, to which he sought revenge by founding Dolhr and subjecting humanity to years of cruel conquest and oppression under his rule.

For all his brutality, Medeus's two reigns over Dolhr were relatively brief, totalling only ten years or so. His first period of rule, presiding over the conflict which would later be called the War of Liberation was ended with his defeat at the hands of Anri, the future founder of Altea who wielded the blade of light Falchion against him. A century later Medeus was resurrected a century later through the machinations of the rogue sorcerer Gharnef, and he engaged humanity in another war of conquest dubbed the War of Shadows. Though he had seen great success in luring human nations to ally with Dolhr, he was undermined by the efforts of Anri's descendant Marth, who killed him again at the climax of the war. Afterward, three years later, the second resurrection of Medeus was the culmination of Gharnef's grand scheme in the War of Heroes, and this time Medeus took a new form: that of a true shadow dragon.

The decline of the dragons

Centuries before the founding of the Holy Kingdom of Archanea, when the dragonkin were experiencing their degeneration, Medeus was the only earth dragon to willingly shed his dragon form and become a Manakete, thus escaping the degeneration of the dragons. All of his fellow earth dragons refused this idea and ultimately devolved into wild beasts which posed a grave threat to the fledgling human race. At the conclusion of a great war between the divine dragons and wild earth dragons, which resulted in all other earth dragons being sealed beneath the Dragon's Table, Medeus was entrusted by the divine dragon Naga with the task of guarding the altar and its seal.

The War of Liberation

As the age of the dragonkin faded into legend, the following centuries saw mankind rising to take the place of dragons as the dominant species of Archanea, finalized with the foundation of the mighty Holy Kingdom of Archanea in the year 0. As humans came to dominance, however, they also came to frequently abuse and mistreat the surviving Manaketes, now largely powerless. From his post at the Dragon's Table, Medeus was forced to observe the atrocities humans constantly subjected his fellow Manaketes to, and ultimately his fury was such that in the year 490, he united the Manaketes into a new nation of their own, the Dolhr Empire. Dolhr was by policy openly hostile to humans, an attitude which culminated three years later in a conflict known as the War of Liberation, as Dolhr declared war on Archanea as retribution for the horrid treatment of Manaketes by humans.[1]

The first great action of the war was the Dolhr assault on the Archanean capital palace, Millennium Court, which was a resounding Dolhr victory. Medeus's army succeeded in conquering Archanea and wiping out all members of its royal family, save for Princess Artemis, who evaded captivity. The rest of the world soon fell too, and so for five years Medeus dominated the entire world. The tide turned against him with the rise of a rebellion in the Altea region led by Caldas of Archanea. At the war's end, Medeus personally entered the fray and decimated Caldas's army with ease.[2] Even as Medeus's immense power seemed impossible to overcome, he was foiled by the sudden appearance of Anri, a young man wielding Falchion. With Falchion, Anri engaged Medeus in battle and emerged victorious, killing Medeus. With Medeus's demise, Dolhr crumbled and faded into history.

The War of Shadows 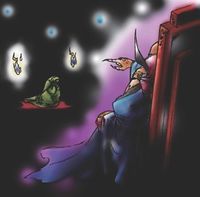 Medeus entrusts Brzak with the retrieval of Nyna.

Earth dragons, by their very nature, are difficult to truly kill,[3] and so nearly a century later Medeus was reawakened through the machinations of the the vengeful sorcerer Gharnef; however, his revival remained incomplete, and he could only maintain his earth dragon form and powers while within the walls of Dolhr Keep itself.[4] Medeus recreated the Dolhr Empire and soon resumed his mission of world conquest in a war later known as the War of Shadows. This time, however, through Gharnef's schemes he now had human nations as his allies in the form of Grust, Gra and Macedon. Through both the sheer power of his armies and those of his allies, and through treachery and back-stabbing, the Dolhr forces rapidly conquered Archanea and most of its allies starting with the second conquest of Millennium Court, subjecting the territories to Medeus's rule.

However, one aspect of Medeus's plan failed to be adequately completed to his designs: the extermination of the Archanean royal family. As with before, one member survived his army's onslaught, when the princess Nyna entered the custody of Camus of Grust as he occupied the capital. Medeus grew weary of Camus's refusal to bring Nyna to be imprisoned under Medeus himself, and so four years into the war he tasked his subordinate Brzak with retrieving the princess. When Brzak's mission met with resistance from Camus and his Sable Order, resulting in the death of Brzak himself, Medeus himself travelled to Aurelis to personally deal with the situation. Though Nyna managed to escape, Medeus captured Camus and brought him to Dolhr for punishment for his treachery.

A year later, the war came to an end with the arrival of the Archanean League, the united army under Marth, at Dolhr Keep. Medeus and the last of the Dolhr army engaged Marth in a final battle within Dolhr Keep, with Medeus unleashing his full power against the army. Ultimately, Marth's army emerged victorious and Medeus died for a second time, swearing to return so long as darkness remained in the hearts of mankind.

Medeus would not remain dead for long, for a mere three years after the end of the War of Shadows, Gharnef was resurrected from his own demise and executed on a new plan to revive Medeus. By the end of the War of Heroes, Gharnef and his minions used the life force of four abducted noble maidens to resurrect Medeus at the Dragon's Table, now in an even more powerful form: a true Shadow Dragon. Even as Gharnef worked to revive Medeus, the seal on the Table, long weakened by the breaking of the Binding Shield, had at last begun to fade enough to allow the captive earth dragons to emerge from within its depths to serve Medeus.

Even as this happened, however, Marth had been entrusted by Gotoh with the task of restoring the Binding Shield and averting the re-emergence of the earth dragons. Having succeeded in completing the shield following the defeat of Emperor Hardin, Marth travelled to the Dragon's Table to stop Medeus's resurrection. By the time Marth reached the Dragon's Table, Falchion in hand, Medeus had already been revived, with the four maidens Nyna, Elice, Maria and Lena surrounding him, hypnotised, in preparation to be sacrificed to him to complete the revival process. Around him, wave after wave of earth dragons emerged from the Table to confront Marth, only to be re-sealed by the Binding Shield. Despite his immense newfound power, Medeus fell for the third and final time to the might of Falchion and the Binding Shield wielded together by Marth. As he died Medeus swore that, should mankind's greed overtake it and the Binding Shield be broken again, he would rise from the dead once more. However, according to Gotoh, this death was very likely permanent and completely destroyed any chance of Medeus returning again.[5]

Medeus is the final boss of Shadow Dragon & the Blade of Light, and is fought at Dolhr Keep in Chapter 25. He fights solely using his Earth Dragon form via the Earthstone, and accordingly is immune to long-ranged attacks and must be fought at 1 range.

Medeus is the final boss of Mystery of the Emblem Book 1, and is fought at Dolhr Keep in Chapter 20. Like all Earth Dragons in Mystery, he takes only half the usual damage from attacks.

Medeus is the final boss of Mystery of the Emblem Book 2 in its true ending, and is fought at the Dragon's Table in the third part of Endgame-2. In order to defeat Medeus, the four maidens surrounding him—Nyna, Maria, Elice and Lena—must be recruited and moved out of harm's way; otherwise, should Medeus's HP be reduced to 0, he will kill them to replenish all of his HP. He is entirely immune to tome attacks and the Levin Sword.

Medeus only appears in the opening cutscene of the fourth episode, The Beginning, giving Brzak his orders to retrieve Nyna.

Medeus is the final boss of Shadow Dragon, and is fought at Dolhr Keep in the Endgame. Before beginning the chapter, he is classed as a Manakete, but permanently becomes an Earth Dragon for the rest of the chapter in an opening cutscene.

Stats with a decimal can vary randomly; the decimal represents the chance for the stat to increase to the nearest integer, or be otherwise truncated.

Medeus is the final boss of New Mystery of the Emblem in its true ending, and is fought at the Dragon's Table in the third part of the Endgame. In order to defeat Medeus, the four maidens surrounding him—Nyna, Maria, Elice and Lena—must be recruited and moved out of harm's way; otherwise, should Medeus's HP be reduced to 0, he will kill them to replenish all of his HP.

Note: Boss stats in Lunatic Mode are rounded to the nearest whole number.

Medeus is the game's twenty-sixth Mythic Hero, and was added to the game in a dedicated Mythic Hero update, made available for summoning as part of a summoning event released on April 28, 2022. Only one variation of Medeus is currently available in Heroes, based on his Mystery of the Emblem incarnation.

Medeus: Earth-Dragon King is only available at 5★ rarity.

Medeus's primary motivation was his quest for vengeance against humanity. Before he developed his hatred against humanity, Medeus is implied to be a humble individual, as he was the only Earth Dragon who willingly discarded his dragon form to become a Manakete, and Naga was able to trust him enough to entrust the task of guarding the Dragon's Table's seal to him.

However, owing to the persecution of the Manaketes he witnessed during his years at the Dragon's Table, Medeus's view on humans shifted drastically for the worse; he believed humans deserved to be treated in kind and sought to implement that through conquest.[1] As part of this, he sought to crush the hope of any who would dare resist his rule by making torturous examples out of those who did, in fact, attempt to do so.[6] He adamantly insisted that all of his conquests and brutal conducts were entirely justified, and that for their crimes against the Manaketes, humans deserved the painful deaths he awarded.[7]

Medeus appears as a support spirit.

Medeus is featured on one card in Fire Emblem Cipher.