This page is about the Rigelian mage; for the Elibean sage see Sonia.

Sonya (Japanese: ソニア Sonya) is a mage appearing in Fire Emblem Gaiden. She is a member of Grieth's pirates, and is recruited at Grieth's Citadel if she is not killed by Celica.

She is one of the children of Jedah, along with her older sisters Marla and Hestia.[2]

She appears in the Northern Desert, under the forced employ of Grieth, and is recruited if Celica decides to fight Deen. Both her and Deen hate Grieth, but they also seem to have their own disagreements, preventing either from doing anything about Grieth.[3] After Deen is killed Sonya retreats to Grieth's Fortress and is recruited after his death; being happy to lend her strength to the ones that dethroned Grieth.

If Celica fights her, she perishes in the desert.

Sonya has a slightly different story role in Echoes: Shadows of Valentia compared to Gaiden. Sonya is a mercenary hired by Grieth, and like Deen, has no particular loyalty to the man. If Celica bypasses her, she chooses not to aid Grieth in defending the citadel.[4] There is no mention of Deen and Sonya keeping each other in check. Sonya joins Celica's group after Grieth's defeat because she thinks their escapades will be an interesting adventure for her.[5]

After this Sonya has no particular story prescence aside from her battle quote with Jedah in act 4.

If Celica decides to fight Sonya instead of Deen, Sonya perishes in the desert like in Gaiden.

Unfortunately, Sonya's black magic spell pool has been reduced from her Gaiden appearance, losing Seraphim and Sagittae, two powerful spells. The loss of Seraphim is particularly painful due to its utility on the terror-filled enemy loadouts of Celica's journey. She still starts with Excalibur, making her a fair critical hit dealer immediately upon recruitment. Her learned magic upon becoming a priestess gives her some interesting utility, being able to warp enemies close to her for her allies to dispose of them as well as the ability to warp to any ally over any distance, allowing for high mobility despite only having 4 movement in her native class line.

There is often debate on the Deen-Sonya recruitment choice; both units are fairly good, though Celica's party has a fair amount of both Mercenaries and Mages. Neither character is excessively weaker than the other initially, though Deen generally will class change sooner than Sonya, and Sonya learns her more interesting utility spells at late levels. Another thing to note is that Sonya's Steel Shield is lost if she is killed as an enemy, while Deen's Brave Sword, while certainly superior, can be pried out of his cold, dead hands as a drop. However in optimal play Deen is vastly preferred over Sonya thanks to his classline and after promotion Sonya will be left in the dust.

It should also be noted that Sonya is Genny's only ranked support partner. If Sonya is not recruited Genny will have only bond supports; if Deen is not recruited Jesse still has Saber as an option. These supports are not too important as neither give amazing bonuses and Genny shouldn't usually be used as anything other than a support unit, but it's still something to consider if the player wishes to see Genny have more interactions.

There are two different variations of Sonya available to Heroes, both of which are tied to her storyline appearance in Echoes: Shadows of Valentia. The normal variation of Sonya is one of the characters added to the game in the Bitter Enemies update, and became available for summoning by players on July 13, 2017. A spring variation of Maria was made available between the period of March 8, 2021 through April 8, 2021 as part of the summoning event surrounding the Hop-and-Go-Seek update; this variation is a Harmonized Hero paired with Tharja, and carries a dual-credit with Awakening as such.

Sonya: Vengeful Mage is only available at 5★ rarity.

Sonya: Dazzling Rabbits is only available at 5★ rarity.

Sonya grew up in a priory with her sisters,[6] though this tired her of piousness and she generally avoids such activities in her adulthood.[7][8] It is unclear when she left the priory and became separated from her sisters. She has a deep-seated hatred of her father, Jedah,[6] due to him being responsible for transforming Marla and Hestia, Sonya's elder sisters, into witches.[2] Sonya has always chosen to live on her own desires, to which Hestia is somewhat jealous of, [9] and to the disapproval of her father.[10] Sonya appears to still miss her sisters, if she falls in battle her final thoughts are of them.[11]

Even after her sister's deaths in the battle against Duma, Sonya searched extensively for a way to return witches to normal. It is unknown if she ever found a way to do this, as she vanished to an ambiguous fate.[12]

Sonya appreciates her appearance, though not to an exaggerated or narcissistic degree.[13]

Her two older sisters, Marla and Hestia, had been reborn as witches to be sacrificed to Duma... Sonya would never forgive their father Jedah for making his three daughters into sacrifices.

Sonya's search for a cure for women turned into witches took her across the land. Her trail ended in a remote region, after which she was never seen again. Rumors fly, however, that shortly thereafter a new witch took up residence in Nuibaba's abode on Fear Mountain. 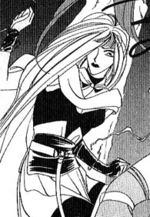 Sonya appears in the Gaiden manga with an initially similar role to her Gaiden appearance, though she is given a comparatively large amount of dialogue and story presence compared to the original Gaiden.

On their journey through the desert, Palla tells Celica about Grieth's two bodyguards, Sonya and Deen. Palla mentions that Sonya and her two sisters were cursed to be witches. Celica decides to fight Deen. During the battle against him Sonya appears, and asks Deen if he's trying to steal her glory again. Deen reminds her that both of them have orders to kill Celica anyway. Sonya then attacks Boey and Mae.

Later, Grieth appears and asks what is taking Sonya and Deen so long to defeat Celica. Grieth also takes the opportunity to attack Deen and Sonya; he had been looking for an opportunity to get rid of the two of them. Deen takes the blow from Grieth for Sonya and dies. Celica, during the distraction, finishes Grieth. Sonya takes Deen's death hard, and mourns him.

After Celica's group arrives at Mila's Temple Sonya tells Celica about Jedah, who resides in the Duma Tower, and that he is likely the one to have Mila. After entering Lost Treescape Sonya tells Celica more about Jedah and her sisters, Marla and Hestia; they were all devout followers of Duma. However, Duma changed, and corrupted his followers, driving Jedah mad and eventually killing Marla and Hestia. Sonya says she'll pray for them when everything is over; she also thanks Celica for showing her that she could change her own fate.

Sonya is featured on three cards in Fire Emblem Cipher.