Heath (Japanese: ヒース Heath) is a Wyvern Rider who appears in Fire Emblem: The Blazing Blade. He at first is a knight of Bern, but defects to become a mercenary under Eubans and later defects again, this time to Eliwood and Hector's side in Kinship's Bond.

Stats with two figures separated by a ~ are presented as a range, representing stats that vary due to random growths. The figures to the left and right of the ~ are the stat's minimum and maximum possible values respectively.[3]

Heath is the first Wyvern Rider and third flier to join your party. Opposed to the Pegasus Knights you already got, Florina and Fiora, his base speed and resistance are comparably low, but he's got decent physical bulk, strength and constitution in return: traits which are usually preferable on a frontline unit. His low base speed is a problem which holds him back at first, but luckily his speed growth is pretty decent and most generic enemies you'll encounter from now on will weigh themself down with heavy weaponry or have bad speed to begin with, so he can grow into doubling speed range quickly. Since his strength and HP growth are high as well, his durability will likely stay good throughout the game (Barrier and Pure Water help out when facing magic enemies) and he can kill most enemies without using expensive weapons in one round once he starts doubling – even though his B lance rank allows him to use most stronger weapons if he needs to.

As already implied, getting enough speed to reliably double enemies is very important for Heath. A good way to obtain the last necessary points of speed is Heath's Wyvern Lord promotion. Sparing an Elysian Whip for Heath isn't hard at all, since you already got two of them before Heath joins, and you'll get another one within a few chapters in case you already used them up. Alternatively, you can also use an Earth Seal, since the first one is soon to come too. Aside patching up his speed, his promotion also boosts his HP and resistance, which improves his poor survivability against magic enemies, so you should promote Heath soon in order to enjoy the benefits of his promotion as early as possible. He also gains access to swords upon promotion, which are a neat weapon type to take out a bunch of axe users such as Pirates at close range without using up your Axereavers.

However, good growths and serviceable bases aren't Heath's most important selling points. His most important advantage is without a doubt his high mobility: flying movement allows you to ignore most terrain completely, and in addition keeps all the advantages of being mounted such as higher movement range in general and Canto. It allows Heath to quickly reach distant enemies and get the first strike on them, avoid dangerous attacks, ferry allied units around, get remote villages or items and much more. Since a lot of maps which will come up soon include heavy terrain which slows down your ground units or even forces them to take long detours, the ability to ignore those penalties can't be valued highly enough. It also means Heath will take more damage from bows, but he is durable enough to withstand a hit or two if needed since their effective damage is lower than in most other games.

All in all, Heath joins with stats which are decent in all important areas aside speed and resistance, and he is capable of solving his speed issues through level-ups and a promotion, while the use of resistance boosting items helps him against mages. Furthermore, he comes with a great class which possesses almost perfect mobility, and he has decent weapon levels. This makes him one of the better units to join your army, despite his comparably late jointime.

There are two different variations of Heath available to Heroes, both of which are tied to his storyline appearance in The Blazing Blade. The normal variation of Heath is one of the characters added to the game in the On Dark Wings update, and was made available to players in the fortieth Grand Hero Battle, which initially ran from February 18, 2020 through February 25, 2020. A ninja variation of Heath was made available between the period of November 8, 2022 through December 8, 2022 as part of the summoning event surrounding the launch of the Wyvern Ninja update.

Heath, Wandering Knight
Heath moved to Ilia and became a mercenary knight of some fame. He fought not for country, but for people in need.

Heath and Priscilla
They fell in love amidst conflict, but Priscilla was a noble, and Heath was a deserter from Bern. Their differences were too great. When they parted, Heath told a weeping Priscilla he would someday return.

Heath and Vaida
After paying her debt to Eliwood, Vaida returned to Bern. Though no longer an official knight, she sought to aid the prince from the shadows. Heath followed her home to Bern to support her.

Heath is featured on two cards in Fire Emblem Cipher. 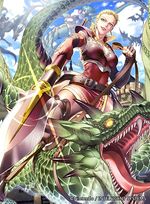 Additionally, Heath appears in the background of one of Vaida's cards.