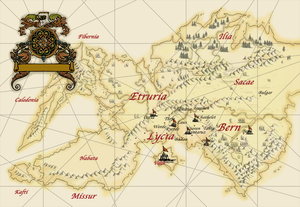 Elibe (Japanese: エレブ Ereb) is the continent where the events of The Binding Blade and The Blazing Blade occur and is where the Scouring, a war between humans and dragons, was fought.

Bern is one the largest of the countries located on Elibe and was founded by Hartmut, one of the Eight Legends. It is a powerful country known for its military might. Bern is the owner of the Fire Emblem, the Binding Blade, and the legendary weapon Eckesachs. It also is the location of the ancient Dragon Sanctuary, the dominion of Jahn and Idunn, which is also the only place on Elibe where dragons can still use some of their draconic powers while in human form.

Wyverns are also only found in the region of Bern, and Bern has domesticated them to train their famous fleets of Wyvern Riders. Bern's three greatest warriors are the Wyvern Generals.

Etruria is another large country located on Elibe and was founded by St. Elimine another one of the Eight Heroes. As such, the St. Elimine church was both founded and is based within Etruria's borders. As like with Bern, Etruria's government is a monarchy. Elimine's personal weapons, the light magic Aureola and Saint's Staff are found here.

Etruria's highest-ranking military officers are the Mage General, the Knight General, and the Great General.

The Kingdom of Etruria also claims sovereignty over the Western Isles, which were settled by the Berserker Durban. There are three main islands:

Ilia is an icy country located north of Sacae founded by the hero Barigan. It is very similar to real-world Siberia, which is covered in harsh and relatively barren tundra. Because the climate inhibits farming, most all income is gained from mercenary work for other countries. It is the native country of pegasi, and since pegasi only allow female riders, many of Ilia's mercenaries are female pegasus knights, of which it is famous for. Ilia's mercenaries are also known for their strong loyalty to their employers.

Missur is a peninsula in the southwestern part of Elibe. It is nearly entirely covered by the Nabata Desert, a wasteland inhabited primarily by desert bandits. It is in Nabata where the Archsage Athos settled and found the city of Arcadia, where dragons and humans live in peace.

Valor Isle, also known as the "Dread Isle," is an island south of Lycia. It is rumored to be cursed, and is avoided by most all seafarers due to tales of voyagers never returning from the island. It is actually the headquarters of Nergal in Fire Emblem, and it can be reasonably assumed that those who landed on the island were killed by the Black Fang. The Dragon's Gate is located on the island.

Kafti is an island off the western edge of the Missur peninsula, connected to it by two bridges. It is featured in Chapter 13 of The Binding Blade.