Not to be confused with Jan, a human member of the Black Fang from The Blazing Blade.

Jahn (Japanese: ヤアン Jahn) was a dragon who fought in The Scouring, the last remaining natural dragon in Elibe. Shortly after being forced to become a Manakete in response to the effects of the Ending Winter, he was gravely wounded by one of the Eight Legends and retreated to the Dragon Sanctuary, where he spent the next millennium in hiding, slowly healing his injuries. When King Zephiel of Bern unsealed the imprisoned Idunn at the end of the thousand years, Jahn sought him out, confirmed his intentions to surrender Elibe back to dragonkind, and entered an uneasy alliance with him, working to eliminate mankind in the Disturbance of Bern.

Following the downfall of Bern, Brunnya arrived at the Dragon Sanctuary to entrust Idunn to the care of Jahn, while she attempted to defend the Sanctuary from the outside. Jahn noted that he couldn't understand what it was which drove Brunnya and her army to be so determined to fight an inevitably losing battle, but nonetheless complied.

When Roy and a small group of his warriors entered the Sanctuary after defeat Brunnya's army, Jahn appeared before them in illusion form and introduced himself as the last natural dragon, explaining the nature of the War Dragons so far exclusively fought by Roy's forces and Idunn's status as an "object" and not a leader. As Roy asked to learn more, Jahn offered Roy a challenge: to storm the Dragon Sanctuary and defeat its War Dragons, in exchange for Jahn slowly telling him more. As Roy progressed through the Sanctuary and seized certain points, Jahn slowly told him the story of Idunn's transformation into the Demon Dragon, the origins of the War Dragons, the creation of the Divine Weapons and the formation of the Eight Legends, the true nature of the Ending Winter and its cause, the transformation of dragons into manaketes, Hartmut's confrontation and sealing of Idunn, and how he himself came into alliance with Zephiel. In turn, he learned of the existence of Arcadia, but dismissed the idea of peaceful coexistence of the two races as nonsense; this opinion and Idunn's origin would soon prove to be troubling news to Fae. Near the sanctuary's peak, he challenged Roy's group, confident of his abilities in the face of his regeneration, but failed and was killed, clearing the way to Idunn herself.

Stats with two figures separated by a ~ are presented as a range, representing stats that vary due to random growths. The figures to the left and right of the ~ are the stat's minimum and maximum possible values respectively.[1] 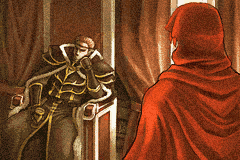 Fifteen years after Nergal's defeat, following Zephiel unsealing Idunn, Jahn became aware of the action as his power started returning; once it fully recovered, from within the Dragon Sanctuary, he began projecting an illusion out into Elibe to search for Idunn's liberator. Eventually, he identified the man as Zephiel, and projected himself into Bern Keep late at night. He asked Zephiel why he had awakened Idunn and identified himself as a dragon, and Zephiel informed Jahn of his intentions to surrender the world to dragonkind.[2]