This page dissects the differences between the 0206 build and the final version of Fire Emblem: The Blazing Blade. A patch for this build can be downloaded here.

The name 0206 is a name derived from the ROM's file name, fe7_0206; "0206" means "February 6th". This build of Fire Emblem: The Blazing Blade is timestamped as February 5th, 2003, at 20:27:53, along with the name "KATAYAMA". This suggests that this particular build was assembled into a "playable" ROM form at this date and time by Makoto Katayama, a programmer credited in the finished game. The date itself places this stage of development two months before the release of The Blazing Blade. This revision is fairly complete.

In 2008, a set of three pre-release builds of The Blazing Blade and The Sacred Stones were leaked from the Intelligent Systems FTP server and obtained and subsequently released by a Japanese group, eventually coming to the attention of the English fanbase through the message board Fire Emblem: Sanctuary of Strategy.[1] The three builds were internally timestamped as having been assembled a couple of months before the final releases of the games, and as such contain numerous differences of varying degrees of substantiality, and provide an interesting insight into the development of the games. 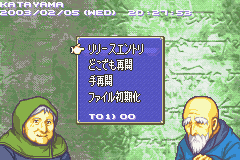 On loading this build, the player is brought to this debug start-up menu with options to start the game from numerous points. In order, these are:

The chapters are listed in chronological order. Interestingly, the pre-release build labels the chapter numbers based on Eliwood mode, with Hector mode chapters having an H suffix. Sidequests have an X suffix.

Within this pre-release build there are various debug menus that can be accessed in various ways. A lot of these debug functions are identical to those in the 0219 and The Sacred Stones's prototype. 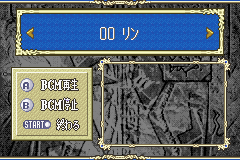 The sound room in action.

Most of the soundtrack featured in the final release is present, however several songs, while clearly identifiable, sound slightly different and/or use different instruments. The songs do not have their final titles, instead using descriptors. For example, Winds Across the Plains is just called "Lyn".

The sound room in this version of the prototype is, graphically, mostly unmodified from The Binding Blade's sound room. Going past song 43 will crash the game in up-to-date emulators, though older emulators are able to go past 43. On emulators that are able to go past song 43, it can be seen that some tracks have glitchy names, some of which take a good few seconds to display. It is currently unknown what happens on real hardware.

A large amount of the graphics are close to or identical to the final release.

The art in the opening demo is somewhat different than the final release in a few places. Somwhat notably, the images in this build are bigger horizontally, though the extended image is not shown because of screensize, the final release has these extraneous portions of the image removed. 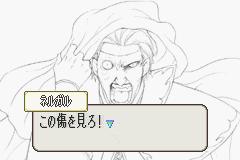 All of the CG art is in varying stages of completion. The vast majority seems to be complete, it is particularly notable that none of the CG art has the sepia filter applied, and thus appears to generally be more colorful. Some of the artwork was revised for anatomy and other touch-ups as well.

The vast majority of the chapter maps in the prototype are extremely similar, or identical to the final release. However, a small few chapters do have somewhat significant layout differences. 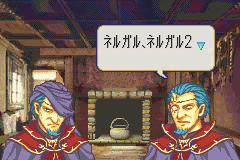 The somewhat amusing expression resulting from the error in Nergal's portrait.

Also of note, the majority of the generic villagers use portraits from The Binding Blade. There is also a minor error in one of Nergal's portraits; his mouth hangs open slightly instead of closing when he is not speaking. 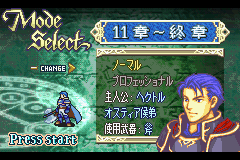 The prototype is fairly complete, game play-wise, though there are occasional glitches throughout the game.

The prototype largely has all the items that are in the final release, however several items crash the game when their help description is viewed, and many items use placeholder icons.

A large amount of support conversations and pairs are implemented into the game, including the scripts to the actual conversations, however several pairs say "Test 1" or some variation. Several support scripts vary from the final release.

The new dancer ring status effects are implemented and functional.