Across the Fire Emblem series, there are a number of alternate modes of gameplay. While the most common are difficulty modes, allowing an adjustible challenge for players, other games feature their own types of modes varying the general flow of gameplay or the story, to either the benefit or detriment of the player.

The first game to feature different formal modes of difficulty was Fire Emblem: Genealogy of the Holy War. Since then, almost every game has featured at least two different difficulty modes, chosen by the player at the beginning of a new game. Between games, there is considerable variation in the difficulty of seemingly the same levels. Each difficulty level can change many aspects of gameplay, such as enemy stats, enemy equipment and skills, the number of enemies present, reinforcement timing, artificial intelligence, and much more.

Main article: Paragon
This gameplay mode appears only in Thracia 776.

In Thracia 776, Paragon Mode (Japanese: エリートモード Elite Mode) is a secret gameplay mode, unlocked by inputting a button combination at the "New Game" menu. In this mode, every playable character has the Paragon skill applied to them, doubling their experience gain; characters who already have Paragon in normal gameplay or are currently wielding the Paragon Sword have the effect doubled, gaining quadruple the experience.

Fire Emblem Gaiden has an identical mode which comprises its Easy mode. 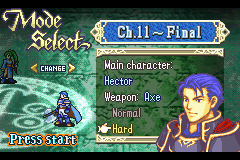 These gameplay modes appear only in Fire Emblem: The Blazing Blade.

Fire Emblem: The Blazing Blade is divided into three "tales", each focused around one of the three main characters. Lyn's tale (Prologue to Chapter 10) and Eliwood's tale (Chapter 11E to Final) comprise the initial "main story"; on an initial playthrough, the player plays through both of them back-to-back. Upon completion of the game for the first time, the player gains the option to choose either game mode upon starting a new game, as well as the option to choose Hector's tale (Chapter 11H to Final). Hector's tale is a retelling of Eliwood's tale from the perspective of Hector; it differs in that it features six unique chapters (Another Journey, Talons Alight, A Glimpse in Time, Crazed Beast, The Berserker, and The Value of Life), two unique recruitable characters (Farina and Karla), a number of potential ending variations based on gameplay performance, minor rewrites introducing new subplots and sequences, and a generally higher difficulty.

Each tale is associated with one save file color, regardless of difficulty setting. Lyn's tale saves are colored teal, Eliwood's tale files are a bright blue, while Hector's tale uses a darker steel-blue.

While many Fire Emblem series games use the world map simply for narration, several games have an explorable world map where the player characters may move to and from locations chosen by the player.

Main article: Creature Campaign
This gameplay mode appears only in The Sacred Stones.

In Fire Emblem: The Sacred Stones, after completing the Final Chapter, the player may choose to continue the save file in Creature Campaign mode. It is an endless post-game mode where the player can fight in skirmishes, accumulate experience, and seek higher records in the Tower of Valni and Lagdou Ruins. By meeting certain criteria in the Tower and Ruins, the player is rewarded with various important characters and antagonists from the main story to use as playable units.

Main articles: Growth rate and Growth point
These gameplay modes appear only in Path of Radiance.

Upon completing Path of Radiance for the first time, the player receives the option to choose between Random Mode and Fixed Mode upon starting a new game. These modes are concerned with variances in the statistical growth of playable units. Random Mode is merely the standard way growth rates work throughout the series, whereas Fixed Mode implements a new system revolving around growth points. Using the growth rates of characters as their base growth point values, further growth points in stats are accumulated through defeating enemies and vary depending on the weapons and items equipped by the unit, and higher growth points in stats result in greater increases in the stats in question.

These gameplay modes appear only in New Mystery of the Emblem and later games.

One of the most well-known caveats of the Fire Emblem series is its use of permanent character deaths. In New Mystery of the Emblem, Casual Mode was introduced, an effort to soften the blow for players new to the series by disabling permanent death for the course of a playthrough. Instead, characters who are defeated in battle merely retreat, and return in the next chapter as if nothing ever happened. Classic Mode is the other option, enabling the standard permanent-death setup of the series. Both of these options are separate from the difficulty modes and are chosen separately, allowing the player to, for example, enable Casual Mode on a Reverse Lunatic playthrough. The Classic/Casual Mode options returned in Awakening, working the same way; Casual Mode is renamed Newcomer Mode in the European English release of the game.

This gameplay mode appears only in Fates.

Fates introduced Phoenix Mode,[1] a mode wherein fallen characters are resurrected the turn after they are defeated in battle. In this mode characters do not say anything when defeated. Unlike Casual and Classic, Phoenix Mode can only be played in Normal Mode.

In some Fire Emblem series games there are segments of gameplay where the player has direct control of the main character and are not under the restrictions of the grid or movement values. Gaiden and Echoes: Shadows of Valentia have these in villages and dungeons, Fates has this when Corrin is managing My Castle, and Three Houses has this when Byleth is teaching at Garreg Mach Monastery. During these segments the player controls the main character and are able to interact with other characters and other things depending on the game.