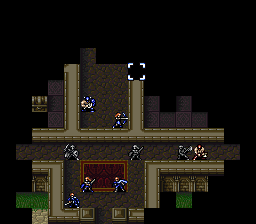 Chapter 8x of Thracia 776, with fog of war in effect. In Thracia, fog of war renders the rest of the map completely unviewable, adding a further element of uncertainty to navigating the map.

Fog of war (Japanese: 索敵 searching for the enemy) is a weather condition first implemented in Fire Emblem: Thracia 776 and the most frequently recurring weather, present in all subsequent games until New Mystery of the Emblem. Designed to add a level of tactical uncertainty and caution to gameplay, a map where fog of war is in effect limits the player's view of the map and its contents to a smaller field. Fog of war is normally portrayed as fighting in the midst of literal fog, rainfall, darkness, or on one occasion as fighting in a sandstorm.

In fog of war conditions, only a small area of vision surrounding each individual player or neutral unit can be seen properly. Enemies which do not fall into this field of vision cannot be seen at all, and as such cannot be attacked. As enemies cannot be seen, when moving allied units it is possible to accidentally run into them; if this happens, the moving unit automatically waits at the spot just before the enemy they collided with, and cannot attack. The AI for enemy and NPC units does not play by the same rules, however, as enemies and NPC units will not be affected by fog of war and thus will attack even units which would not fall into their field of vision. A unit's field of vision will only be updated after a unit performs an action, such as waiting or attacking.

In most appearances of fog of war, the fog will merely dim and/or darken the rest of the map; the layout can still be easily seen and terrain data is still actively available. This is not the case in Thracia 776, where the shrouded parts of the map are instead blacked out entirely and the terrain window is hidden, adding a trial-and-error element to navigating the area. 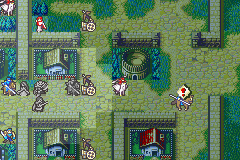 Sain runs into an enemy hidden by fog of war. This interrupts his selected movement path and forces him to wait where he is.

Generally speaking, the battlefield area visible to the player at any given time depends on the vision of their units in play. The majority of units in every game have only mediocre vision, but from The Binding Blade onward, a handful of classes—Thieves, Assassins, Rogues and Whispers—possess an innate greater field of vision in fog of war. A thief unit will typically possess double the vision range of a normal unit; the exact degree of increased vision varies depending on the game and depending on the base vision field.

Nealuchi stands in the middle of fog of war. In his bird form, he has zero vision and cannot even reveal the spaces adjacent to himself. The fog is also disallowing the player from viewing the terrain stats of the space next to Nealuchi.

Beyond the use of a Thief unit, there are two items with the ability to temporarily increase visibility on a fog of war map: the Torch item and the Torch staff. When used, they provide an increase to the unit's field of vision, slowly decreasing back to normal at a rate of one tile per turn. In some games, the Torch staff instead casts a vision increase at a fixed spot within a certain casting range, independent of the casting unit. Most games will readily point this out and emphasise the value of bringing a thief unit to a fog of war map.[1] Another means of increasing vision is available in Radiant Dawn with the character Janaff, whose personal skill Insight increases his vision.

In Radiant Dawn, unlike in other games in the series, every class is affected differently by fog of war and has a different vision range. For laguz classes, their vision range usually depends on whether or not they are shifted or unshifted. Notably, all bird tribe laguz have very poor vision in fog of war conditions as a trait of their species,[2] to the point that their vision is reduced to 0 when they shifted, which makes them (with the exception of Janaff, due to Insight) the only classes in any game to be completely unable to reveal enemies and spaces hidden by fog of war.

Beorc classes Laguz and other classes

On rare occasions, environmental obstacles can allow for increased vision. In Radiant Dawn, obstacles called watch fires are placed at intervals around some fog of war maps. When lit by a unit, a watch fire casts a wider field of vision at a fixed space until extinguished by a unit; both allied and enemy units are capable of lighting or extinguishing them.

Fog of war maps by game

Additionally, any skirmish (excluding visits to the Tower of Valni and Lagdou Ruins) has a random chance of having fog of war in effect in any given visit.

In Path of Radiance, fog of war will only be present on these chapters when played in Hard Mode or Maniac ModeJP. Easy ModeUSEU and Normal Mode do not have fog of war in any chapter.

No chapter of the main story mode has fog of war. Fog of war only exists in the multiplayer battle mode, where it can be enabled or disabled for use in a round of multiplayer gameplay.

Additionally, fog of war can be enabled or disabled for use in rounds of multiplayer gameplay.

In Fire Emblem Fates, traditional fog of war is not present, though two chapters have mechanics that function somewhat similarly. Chapter 7 of Revelation obscures rooms until a unit walks into them. Chapter 10 of Revelation obscures unit vision by covering the entire map in snow; units in the snow cannot move and the player cannot move into it unless they destroy the snow first. The snow also partially obscures the terrain.