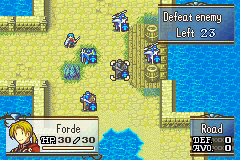 Five units – Gilliam, Vanessa, Tana, Forde and Franz – have rescued units and are carrying them, as shown by the blue icon in the lower-right corner of each unit.

The rescue (Japanese: 救出 rescue) command is a gameplay mechanic introduced in Fire Emblem: Thracia 776 and present in all subsequent games until Fire Emblem: Radiant Dawn. Rescuing allows playable units to pick up allied units – using the Rescue command – who are smaller than them, in order to protect them from harm or to carry them around the battlefield. A unit can rescue other playable units affiliated with their own army, as well as NPCs or partner units, but cannot rescue enemies.

Rescuing was removed from Fire Emblem: Shadow Dragon onward. However, the Shelter skill in Fire Emblem Fates grants use of a command with the same name in Japanese (renamed to Shelter in the English localization), which acts similarly to rescuing from previous games. However, it is simply a variant of the Pair Up command, rather than being a separate mechanic.

The primary intention of rescuing is to allow players to protect their more vulnerable units, such as helpless units or those who are low on HP, by picking them up and having another unit shield them from further damage and/or carry them away from danger. However, rescuing also has a number of other secondary uses and applications.

A player can have high-movement units rescue their low-movement allies to more efficiently convey their army across a larger battlefield in a timely fashion. A widespread of this being carrying a Lord character to the seize point, since Lords always have low movement before (and sometimes even after) promotion. This is particularly common in Fire Emblem: The Binding Blade, where the maps are particularly large and Roy, the game's Lord, is often considered to be a subpar unit who struggles to keep up with other playable units in battle.

In maps where the player's army is accompanied by NPC units, rescuing has several particular uses. If there are helpless NPCs present, they can be rescued to better protect them from harm, which is often necessary to have an easier time clearing chapters in which they appear. On occasions where these units are combat-capable, rescuing can be used to prevent these NPCs from killing enemies and stealing experience needed by the player's units, or to prevent them from rushing into a situation where they will be overwhelmed and defeated.

Thracia 776 uniquely features an offensive, enemy-targeted version of rescuing called capturing. Following the same stat rules and limitations as rescuing, units can overpower their foes and, if they successfully defeat them, subdue and capture them. This allows the player to trade with the enemy to steal their items, and then release them.

The ability to rescue is based around the constitution stat (from Thracia 776 until The Sacred Stones) or the weight stat (Path of Radiance and Radiant Dawn). Broadly speaking, a unit can rescue any ally with a lower constitution/weight stat than their own, and units mounted on horses, pegasi and wyverns are governed by unique rules which allow them to have an easier time rescuing units of higher Con/weight. In the Game Boy Advance games, a unit's range of constitution stats which they can rescue is simplified through use of Aid, a "stat" displayed on the profiles of all units which automatically provides the maximum constitution the unit can handle when rescuing.

A unit who is currently in the process of being rescued is referred to as a traveler (Japanese: 同行 companion). Travelers cannot perform any actions themselves while they are still being rescued, although other units (including their rescuer) can trade with them. While carrying a traveler, a rescuing units sustains penalties to their stats which, while varying between games, primarily affect their skill, speed and movement; these stat penalties are automatically removed once the rescuer drops the traveler or gives them to another unit. Typically, the lower the traveler's Con/weight is, the less severe the stat penalties inflicted by the rescuer will be. The traveler also does not experience the effects of status ailments, nor will they heal from them.

Rescuing a unit ends the rescuer's turn, with the exception of Canto activating. Both the rescuer and any other allies who have sufficiently high Con/weight can pass travelers between each other through the Give and Take commands. Any unit holding a traveler can put them down with the Drop command; a traveler who has just been dropped is considered to have already moved in that turn, and cannot move again until the next turn unless they are refreshed by a Dancer/Bard/Heron. If a rescuer dies, the traveler unit is immediately released.

For the purpose of these calculations, "Unit A" is the unit doing the rescuing, while "Unit B" is the traveler, or unit who is being rescued.

In all games, reduced stats are rounded down to the nearest whole number.