This article is about the shopping option in Radiant Dawn. For the skill that reduces item prices in shops, see Bargain. 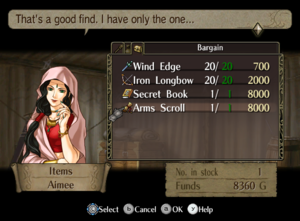 The bargains service in Aimee's shop.

The bargains service (Japanese: ほりだし物 bargains) is a special shopping option present in Fire Emblem: Radiant Dawn. It is one of the three categories of item sold at Aimee's shop in the base, where she sells rare items which the player cannot otherwise buy at that point in the game which she obtains through secret business connections, similar to the secret shops of earlier games.[1]

Its wares typically include rare, unusual or powerful weapons or staves, and uncommon and stronger recovery items. They also occasionally offer stat-boosters and, in Part 1, Master Seals. In earlier parts of the game, the bargains service will often stock weapons and staves which can be bought normally later but are not currently available and are more powerful than the armory's current weapon stock. As the game progresses, bargains will begin to sell S-rank weapons which are not available in the armory at any point, such as Bolganone and Peshkatz. However, all bargains are available in very limited quantities with only one of each item available per chapter unless otherwise marked.