A Glimpse in Time

To access this chapter, Nils must have reached level 7 in Lyn's tale, and Kishuna must have been defeated in Chapter 19x.

Main article: A Glimpse in Time/Script 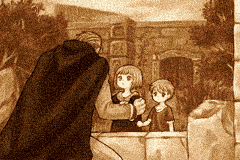 Nergal, with Ninian and Nils.

The chapter opens with a flashback featuring three people, an older man, a young boy, and a young girl. The man tells his children that he is going in search of someone named Aenir, and that they have enough food for ten days. The man tells them that if he does not return in ten days that they should leave through the Dragon's Gate. The man leaves, while the two children beg for him to stay.

Hector, Eliwood, and Lyn follow Ninian into the forest. Eventually, Ninian arrives at some ruins resembling those appearing in the opening flashback. Lyn catches up with Ninian, and asks her what is wrong. Ninian is enthralled by the ruins, finding them incredibly familiar. Hector and Eliwood are very confused as to why Ninian would be familiar with anything on the Dread Isle.

Hector is still focused on traveling to the Dragon's Gate, though Lyn thinks they should give Ninian some time here, as it may help her recover her memories. Hector insists that they are in a hurry, but Eliwood agrees with Lyn.

Teodor approaches from a nearby hallway, greeting them, introducing himself as a weary traveler. Teodor and Hector's group agree that resting in the ruins together is alright for the time being. Hector asks Teodor if he knows anything about these ruins, and he is enthusiastic to tell them.

The ruins date back to the Scouring, 1000 years ago; during that time a powerful sorcerer lived there. The ruins caught Teodor's interest due to several tomes within the ruins, providing a wealth of knowledge for dark magic. Teodor explains that sacrificing one's self is integral to mastering dark magic, and mentions Bramimond as an example.

Teodor ends their conversation by stating Eliwood's name, which immediately puts the group on edge; he is happy to have the weakened company of his targets. Teodor warps further into the ruins, and a black fog shrouds the ruins. Ninian seems to have also wandered off in the confusion.

Hector and the others continue their search for Ninian. Lyn finds Ninian deeper in the ruins, in what seems to be a library, enthralled by a picture there. Lyn describes the picture as depicting a single dragon and a single human. Hector thinks it is an image of a battle from the scouring, though Lyn states it is not, and finds the picture eerie. Eliwood thinks the picture belonged to the former resident of the ruins, and Lyn wonders who they were.

Ninian steps out from the library, and is ready to leave. She claims to have recalled nothing, and Eliwood assures her that her memory will return in time. Hector is happy to return their travels to the Dragon's Gate.

Shortly after the group leaves, Nergal teleports into the ruins. He is disoriented, as he had intended to be in the Dragon's Gate. After a moment of musing, Nergal realizes that that this is a place he studied magic during the Scouring. Nergal also somewhat remembers leaving something valuable in these ruins, but cannot place exactly what. Nergal seems to have trouble recounting his past, experiencing pain at this; he discards the thoughts, reaffirms his desire for power, and leaves.

All of their battles have led them here. Now, at long last, they've finally reached the Dragon's Gate. Hector gains a brief respite before the decisive battle. Shortly thereafter, he noticed something... Ninian has gone missing. There! Her pale figure vanishes into the dark woods, her gait is unsteady, as though she were possessed. Hector quickly gives chase.

Stats with two figures separated by a ~ are presented as a range, representing stats that vary due to random growths. The figures to the left and right of the ~ are the stat's minimum and maximum possible values respectively.
Main article: Teodor

This chapter is yet another Fog of War map so make sure to bring Matthew some torches and the Torch staff. The primary enemy type you will encounter in this map are Knights so deploy a unit that can easily take them out like Hector or a Mage. This map enemies also have the ability to inflict your units with sleep or poison so the Restore staff is recommended. Since there are no reinforcements, Merlinus will not need to be protected if he is deployed.

All Thieves in this chapter have capped speed, meaning that if they steal something, Matthew cannot steal it back. Matthew also cannot steal the tools they will use to steal the treasure. There is a thief in the corridor to the immediate right. He will move to steal the Talisman in the northern chest. Killing him early will allow you to open the northern chest at your leisure. Since this thief is specifically programmed to proceed down the corridor, if you block his path, he will attack your units or steal an item. There is another thief to the north of the eastern chests. He will steal the Dracoshield on turn 2 and then the Eclipse tome. Since he steals these items in this specific order and it is impossible to steal them back, if the thief manages to steal the eclipse tome, he will only drop that instead of the shield. If you cannot take him out before turn 3, place your units on the chests to prevent him from stealing, then take him out on the next turn to retrieve the Dracoshield.

There is an archer next to the eastern ballista at the beginning of the map. He will ride the ballista on the first turn, so make sure to not use Fiora or Florina to push towards the throne. Furthermore, by the second turn, two Mages and two Knights will be positioned near the ballista. Their presence makes taking out the ballista quite dangerous especially for Cavaliers and Paladins due to the Knight with a Horseslayer. Therefore, the best unit to push towards the throne while clearing out the many Knights and Mages in the way is Hector with a Hand Axe. You will just need to bait the Troubadour with the Sleep (staff) to target a unit with lower resistance so Hector faces no risk of falling asleep.

Once you come within ten tiles of the throne, Teodor will start to use Eclipse, which halves a unit's remaining HP or kills them if they 1 HP remaining. Fortunately, Eclipse has a very low hit rate of 50, meaning it will frequently miss.

Teodor is a fairly difficult boss to kill due to his Nosferatu tome which heals him for 100% of the damage it inflicts on your unit and due to his fairly high avoid. Luckily the Nosferatu tome is very heavy and will halve Teodor's speed. The easiest way to take Teodor out is by baiting him to attack you units with Eclipse by placing units exclusively within its 3-10 range. Then, attack Teodor with 1-2 range weapons. He won't be able to counterattack which also means he also cannot heal. If Teodor breaks Eclipse before you reach him, you will have to deal with him using his Nosferatu tome. Pure Water is helpful here to mitigate damage and reduce Teodor's healing potential. Since Nosferatu will likely heal any damage done by an attacking unit, it is recommended that you place a unit with 10-11 speed, high strength, and the ability to survive a 26-29 strength magic attack in front of the boss and allow him to attack that unit on the enemy phase. Teodor will receive two consecutive hits on the enemy phase after he attacks and be left with low HP, hopefully enabling your units to land the final blow and seize with Hector on the same turn.