Night of Farewells (Japanese: 決別の夜 Night of Farewells) is the sidequest of the twenty-sixth chapter of Eliwood's tale and twenty-eighth of Hector's tale in Fire Emblem: The Blazing Blade. To play this chapter, the player must have Nino speak with Jaffar in the previous chapter and keep both alive.

In the middle of the night, Nino attempts to sneak away from the group, but she is confronted by Jaffar. Nino admits that she is leaving to see Sonia, and he decides to accompany her. Eliwood, Hector, and Lyn eavesdropped on Nino and Jaffar's conversation; Eliwood and Lyn are concerned that Nino is heading into a dangerous situation, but Hector doubts that Jaffar's life is worth saving. Eliwood states that he wants Jaffar and Nino to continue living after the suffering they experienced. Hector relents, and the lords pursue Nino and Jaffar.

Limstella teleports to Sonia; Sonia states that she will kill Eliwood herself, as Nergal ordered of the Black Fang. Limstella and Sonia are interrupted by Brendan; Sonia admits that she has been manipulating Brendan and the Black Fang. Brendan then attacks Sonia; he injures her, but is killed in the process. Limstella takes Brendan's quintessence; she offers to take over for Sonia, but Sonia rebuffs her offer, insisting that she will kill Eliwood.

Nino and Jaffar arrive at the temple, and encounter a fleeing Jan. Jan tells the two that Brendan has been killed before Sonia appears and he flees. Sonia berates Nino for her failures and uselessness. Sonia also reveals the truth of Nino's family: Nino is the daughter of a family of powerful mages from Lycia. Sonia forced the family to relinquish a secret of the dragons before killing them; Nergal saw potential in Nino and ordered Sonia to spare and raise Nino as her daughter. Before Sonia can kill Jaffar and Nino, Eliwood and company arrive. Sonia floods the temple's pathways and teleports away; she informs the group that pathways will continue to form that will lead them to her.

After Sonia is defeated, Nino informs Jan that she learned the truth of her family. Jan gifts Nino a pendant that belonged to her real mother; Brendan had investigated his wife's past and discovered that Nino was not Sonia's daughter. Nino thanks Jan for the pendant and parts ways with him and the Black Fang family she knew before returning to Eliwood's company. If Nino was defeated in battle, she stays behind to heal, and wishes Eliwood well; if Jaffar was not defeated, he offers to aid Eliwood in Nino's place. If Nino and Jaffar were not defeated, they join Eliwood to stop Nergal. In Hector's tale, Hector confronts Jaffar; Hector states that he does not trust Jaffar and will kill him if he does anything suspicious, though Jaffar does not respond.

At the water temple, Limstella appears before a dying Sonia. Sonia weakly cries out for Nergal to save her. Limstella states that, as a morph, Sonia can no longer aid Nergal through even providing her quintessence as the other fallen Black Fang members could; Sonia dies refusing to believe she is a morph.

Hector's Tale: Jaffar and Nino, Black Fang assassins. Although Hector cannot forget his hatred for Nergal's former henchman, Jaffar, Hector allows him to join the group, with Nino at his side. That night... 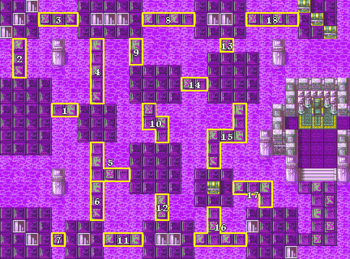 The bridges present on the map appear and disappear on set turns.

Merlinus cannot be deployed in this chapter.

All reinforcements are halted when Sonia is defeated.

Stats with two figures separated by a ~ are presented as a range, representing stats that vary due to random growths. The figures to the left and right of the ~ are the stat's minimum and maximum possible values respectively.
Main article: Sonia

Note that this is one of the few chapters which Merlinus cannot be deployed in, preventing any excess items from being sent to the convoy. Therefore, if there are any items the player seeks to obtain in this chapter, it is important to leave some space in their units' inventory.

When the turn count reaches 22, almost all bridges will respawn and will not disappear.

WARNING! Either due to an oversight or glitch, at least in Eliwood normal mode, the two vertical bridges at the northwestern most corner WILL NOT respawn once they vanish. If Eliwood gets stuck in the water due to either one of those two bridges disappearing underneath his feet, and there are no flying or Pirate/Berserker units to rescue him, the chapter will be rendered unwinnable (since he needs to seize the throne) and the player will be forced to restart.