The Distant Plains (Japanese: 遙かなる草原 Distant Plains) is the tenth chapter in Fire Emblem: The Blazing Blade, and the final chapter of Lyn's tale. 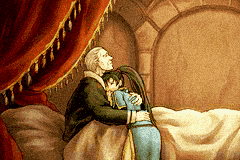 Lyn reunites with her grandfather, Hausen.

Lyn has at last arrived at Castle Caelin. After battling her way through the last of Lundgren's forces and Lundgren himself, Lyn enters the castle. Inside, she encounters Reissmann, the chancellor of the Caelin Royal Family. He reveals that he received notice of Kent and Sain's success in locating Lyn but was imprisoned by Lundgren to prevent the marquess from finding out that he had a living heir in Lyndis. Reissman leads Lyn to her bedridden grandfather, and the two finally meet. Hausen apologizes to Lyn for being too prideful to accept the love of her parents, ultimately keeping them apart and, in his view, leading to Hassar and Madelyn's death at the hands of bandits. Lyn eases her grandfather's regrets by telling him that although her parents end was indeed tragic, they lived a life full of happiness, peace, and love. Hausen is comforted by Lyn's words and tells her he can now die in peace. Despite her grandfather's poor health, Lyn encourages Hausen to not give into despair and to continue living so that they can make up for lost time.

After an unspecified amount of time passes, It is revealed that Hausen is making a good recovery from his illness. Lyn tells Sain and Kent that she plans on ensuring that her grandfather lives a long life and, thus, plans to stay in Caelin. Florina and Wil both reveal that they too plan to stay in Caelin in service of Lyn herself and House Caelin. Later that evening, the tactician says their goodbyes to Lyn. Although she is sad to her trusted friend depart, Lyn does not request for the tactician to stay. Rather, she wishes them success on their journey to become a master tactician and says that they will surely meet again.

There are no forced actions in this chapter so you may approach it however you see fit. You are also allowed to bring all thirteen units available in Lyn's Tale for this chapter, though you are also free to undeploy anyone you feel will not be helpful.

On the third turn, it will start to rain, increasing the movement cost for plains terrain to two for all units including Nomads. In the case of Pegasus Knights, their movement cost is increased to two for all terrain. Cavaliers will now have a movement cost of 3 on plains terrain. There are tiles that have no increase in their movement cost, which include the house tiles and the bridge tiles. Even though Lyn will warn you a turn before the weather changes, this can make the chapter take very long to clear if you decide to get Lyn to the throne without rescue dropping. To get around this setback, you can rescue drop a unit like Wallace, Kent, or Sain (preferably promoted) on the south side of the mountains and manage the enemy units or weaken Lundgren while Florina retrieves Lyn for a quick seize. However, such a strategy can cause you to miss out on the Energy Ring, which is the only one available if you decide to follow Hector's Tale. Also, make sure to use the Energy Ring before the chapter ends or it will disappear.

There is an Armory available that sells weapons effective against Lundgren, however the only weapons you cannot obtain by other means are the Steel Bow and the Heavy Spear neither of which are necessary to take out Lundgren. If Erk or Lucius are low on tomes, they can restock at the Vendor.

As for taking down Lundgren, a promoted Wallace will serve you well against him. With the Iron Axe, Wallace does about nine damage per round and takes eight damage from Lundgren's Silver Lance. After Wallace has whittled Lundgren's HP down, Lucius or Erk can finish the job, enabling Lyn to seize the gate. If Lucius misses, rescue him. Lucius at base gets one-shot by Lundgren's Javelin. If you do not have a promoted axe user, you could use Erk and Lucius to attack at range to secure the kill. Make sure to rescue drop them out of the way before Lundgren attacks them with his Javelin if you are doing this method as Serra will likely be unable to heal them for a few turns due to the weather. Getting the boss kill with Lyn is significant in terms of the story but not recommended as she has a very low hit rate, except with the Lancereaver, and will get one-shot by Lundgren's Silver Lance unless she used the Angelic Robe obtained in Chapter 6 which is also not recommended.

This chapter of Lyn's tale is the last opportunity to meet one of the requirements for chapter 19x pt 2. Nils must be level 7 by the end of this chapter. If the player is particularly desperate to reach this goal they can clear most enemies from the map then have Nils play for a unit over and over again, as this will always give him experience. Though this does have the downside of massively inflating the player's turn count.