Kishuna (Japanese: キシュナ Kishuna) was one of Nergal's earlier creations, being his 252nd morph,[1] and intentionally created with the capacity to feel emotion. 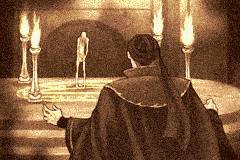 Kishuna is a mysterious enemy character who appears throughout Fire Emblem: The Blazing Blade. His true intentions are unknown, but Kishuna has a tendency to appear before Lyn, Eliwood, and Hector during their travels.

Kishuna's first appearance is in Chapter 18xE/19xH, much to Aion's chagrin.[2] Being within a certain proximity to Kishuna also seems to evoke unease and agitation; Lyn and Hector are shown to fall under such effects in Chapter 18xE/19xH.[3] Kishuna always appears accompanied by morph allies, though Kishuna himself shows no particular acts of aggression other than appearing. His morph companions, however, will attack anyone that comes near. Aion seems to be familiar with Kishuna, but it is unknown how he came to know of the magic seal.[4] Defeating Kishuna here is one of the requirements for proceeding to Chapter 19x pt 2; if he is defeated here, Kishuna does not die, merely teleporting to safety upon defeat.

Kishuna's next appearance is in Chapter 22xE/23xH. Lyn, Eliwood, and Hector fall into underground ruins in the desert on their travels to meet Athos. If the game is in Hector mode, Kishuna has a flashback recalling his creation by Nergal, which does not occur in Eliwood mode. Kishuna is once again accompanied by several morphs. Hector, Nils, and Pent discuss the thick feeling in the air caused by Kishuna.[5] Once again, Kishuna vanishes after being attacked without saying a word.

Lastly, Kishuna appears in Chapter 32x, Nils mentions that his magic sealing aura no longer feels hostile and instead is filled with sorrow.[6] The lords defeat Kishuna's morph companions, and, finally, kill Kishuna himself. According to Nils, Kishuna's last words were calling out Nergal's name.[7]

Kishuna is very much a character that keeps to himself, not speaking a single word until his death. Considering his last word was Nergal's name, Kishuna seems to have still held some feelings towards Nergal after being rejected. 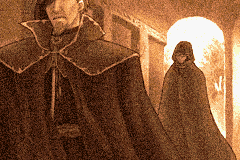