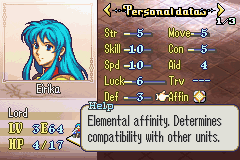 The affinity as seen on Eirika's profile in Fire Emblem: The Sacred Stones.

Affinities (Japanese: 属性 attribute), known as attributes in Path of Radiance, are a game mechanic which were introduced in Fire Emblem: The Binding Blade. It is an attribute innate to every playable unit which gives them one of several elemental affiliations which influence the effects of supports on a unit. Every affinity awards a different set of bonuses which improve a unit's performance when they have a support relationship with another unit, and when two units support each other their bonuses are added together, giving different combinations of units different support bonuses. In Radiant Dawn, affinity awards other bonuses in addition to this.

Affinities are present in only five games in the Fire Emblem series, and were removed in all games from Fire Emblem: Shadow Dragon onward.

In every game that features affinities, all playable units are given one affinity. Depending on the game, enemy and NPC forces may or may not have affinities as well. The primary use of affinities is to determine what stats characters gain boosts in when they support with other units. This, however, renders affinities on non-playable characters and bosses useless, with some exceptions; in Fire Emblem: The Blazing Blade, for instance, the bosses Paul and Jasmine have an A support with each other, thus allowing for the two to increase their stats if they stand near each other.

In terms of supports, boosts in stats given by the affinity of two characters stack, and their initial effects are doubled and then tripled for B and A level supports; effects that have a decimal in their total sum, however, are rounded down.

In The Binding Blade, Dayan and Yoder discuss the role of affinities in the religious cultures of Elibe in their support conversations. Both the traditional mythology of Sacae and the teachings of Saint Elimine state that all people are connected with and protected by one elemental affinity which is bestowed upon them by a divine power (the sky and earth in Sacaen lore, and the creator gods in Eliminean lore); Dayan says that he is aware that his affinity is anima, suggesting that he learned this through the Sacaen culture.[1] According to both mythologies, affinities are powerless on their own, but forming bonds and "linking hearts" with others reveals their true power, although neither Dayan nor Yoder is sure what this true power is.[2]

In the three Game Boy Advance titles—Fire Emblem: The Binding Blade, The Blazing Blade, and The Sacred Stones—there are seven affinities.

No enemies in The Binding Blade have affinities. In The Blazing Blade, only seven enemies have affinities, all of them bosses: Paul, Jasmine, Lloyd, Linus, Brendan, Kishuna, and the dragon. In The Sacred Stones, all bosses have affinities; additionally, all monster units have the dark affinity.

Uniquely in Fire Emblem: The Blazing Blade, the game's customizable tactician character gives the player's units a "tactician's bonus" based on affinity. Units who share the same affinity which the player assigned to the tactician at the beginning of the game gain small statistical boosts to their hit rate and avoid, which grow stronger as the tactician's ranking increases throughout the game. Additionally, every unit also receives a boost to dodge regardless of affinity. For every star displayed in the tactician's Rank menu in preparations, units receive +1 to each calculation they qualify, for a maximum +10 boost per calculation.

Fire Emblem: Path of Radiance and Radiant Dawn feature eight affinities. Unlike in the Game Boy Advance games, affinities no longer award bonuses to crit or dodge. Additionally, in Radiant Dawn, affinity only influences the effects of buddy supports, while all bond supports provide the same crit bonus regardless of affinity

In Path of Radiance, all bosses except Tomenami have an affinity, while generic enemies and NPCs still do not. In Radiant Dawn, all units of all affiliations are assigned affinities.

The bonuses awarded by the affinities differ slightly between the two games. They are as follows: 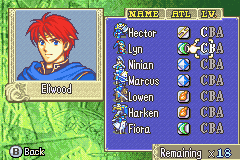