Eliwood's group finally arrives at the Dragon's Gate. Ninian immediately senses something horrible and panics, realizing that her presence at the gate is a mistake. Ephidel warps in to introduce himself and taunt Hector and the others about the death of Leila. Ephidel warps to Ninian and then warps her and himself deeper into the Dragon's Gate, near Darin; Ephidel assigns Darin the task of eliminating Eliwood, Hector, and Lyn before taking Ninian to the gate itself, where Nergal and Elbert are. NElbert is distraught at Ninian's return, and charges Nergal, though Jaffar strikes Elbert, and Elbert collapses. Outside the gate, Eliwood and Hector are taunt by the Cameron before the battle begins. 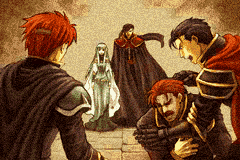 Nergal with Ninian under his control.

Once Darin is defeated, Eliwood and the others move deeper into the Dragon's Gate to find Elbert; they find him near the gate itself calling out to him weakly. Elbert immediately tells Eliwood to take Ninian away from there; Eliwood realizes that Ninian is even present, though she is silent, and she will not move. Hector the grabs Elbert, and Eliwood Ninian; however, before they can leave, Jaffar blocks the room's only exit. Elbert warns Eliwood not to fight Jaffar, but Eliwood insists that it is their only choice; Ephidel then warps into the room and comments similarly to Elbert.

Ephidel dismisses Jaffar, and tells Eliwood that Nergal has a "special show" for him; Elbert then screams in pain, and Ninian mumbles the word "power". Nergal appears and commands Ninian to open the Dragon's Gate, and she complies. However, as a dragon emerges from the gate, Nils runs into the room and snaps Ninian out of her hypnosis, causing the gate to deactivate suddenly. Nils tells everyone to flee, and they do; Nergal then teleports away as an explosion occurs, consuming Ephidel. Nergal quickly reappears to grab Ninian and Nils, but Elbert stabs Nergal; Nergal warps away again. Eliwood tells Elbert they will head home now, but Elbert states that he cannot go on any longer. Elbert apologizes to his wife Eleanora and dies in Eliwood's arms.

The placement of the two non-main Lords is based on their position in deployment order, which can vary from previous maps.

All reinforcements are halted when Darin is defeated.

Stats with two figures separated by a ~ are presented as a range, representing stats that vary due to random growths. The figures to the left and right of the ~ are the stat's minimum and maximum possible values respectively.
Main article: Darin

This chapter can be very confusing, with a wonky arrangements of rooms and corridors, plenty of chests, doors, and collapsible walls, and multiple routes towards the throne. Bringing Matthew along isn't necessary for this chapter because of the dropped Door Keys and Chest Key, but he will be very convenient. If you decide to deploy Merlinus, there will be reinforcement Pegasus Knights appearing on turns 9 and 10 in the bottom left corner which could easily endanger him. Leaving one or two units to defend Merlinus and kill the Pegasus Knights is recommended. Also, the secret shops on this chapter don't offer any notably, spectacular items, so visiting them is not recommended.

The most common approach to this chapter is to move through the western corridor with some type of axe user taking the lead in order to deal with all of the Cavaliers and Cameron. The narrow hallway provides a neat choke point that funnels enemy units as they approach. This route also provides access to western chests located on the map. You should also go out of your way to kill the Sniper in the south western room and open the chest located next to him. This chest contains the only obtainable Brave Bow in the entire game and will be especially potent if given to a well-trained bow user—like Rebecca.

Cameron will be the easier of the two bosses in this chapter. He will wield a Halberd in Normal mode, so make sure you do not attack him with mounted units like Kent or Sain. Aside from that, killing him should be straight forward—any axe user should do. Any of your lords' signature weapons, Rapier, Wolf Beil, or Mani Katti, should also be effective.

By the time you have killed all the cavaliers and Cameron, you should be making your way to intercept Legault in order to recruit him. He will most likely have opened both eastern chests, meaning that by recruiting him you will also obtain a Barrier staff as well as a Guiding Ring. On turn 7, a reinforcement Thief should appear holding a Member Card. This is the only obtainable Member Card in the entire game, so taking an effort to steal it now could be invaluable in the future. After these objectives, you should be nearing Darin and the throne.

Darin can be a difficult boss if you are not prepared. First, you want to bombard him with magic attacks from a distance. He does have very high resistance, so don't expect magic attacks alone to kill him. Canas wielding Luna will be especially strong because the tome ignores resistance. Note, attacking from range will not be a safe option in hard mode as Darin will be wielding a Spear. Afterwards, you'll need some melee attackers in order to finish him off. Some strong options include Dart wielding a Hammer, Kent/Sain with a Heavy Spear, Hector's Wolf Beil, or any sword user with Armorslayer. Kill Darin, then seize the throne.