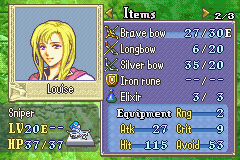 Viewing Louise's inventory in Fire Emblem: The Blazing Blade: she has five items on hand (a Brave Bow, Silver Bow, Longbow, Iron Rune and Elixir), and so her inventory is currently full.

A unit's inventory (Japanese: 持ち物 belongings) is their personal stock of weapons and items which they are currently holding on their person. Reflecting the finite storage space of objects able to be carried by an unaided individual at a time, units can only ever have in their inventory a small number of items, typically between four and seven and depending on the individual game; the unit is disallowed from carrying items beyond their inventory limit, forcing them to either discard any further item completely, or to instead send it to the supply convoy for storage. Items can be traded between the inventories of units, or swapped in and out of the supply convoy.

Typically, a unit's inventory is singularly applicable to all item types in the game, but there are exceptions to this: Mystery of the Emblem and Path of Radiance partition the available inventory into two equal halves, one for weapons and the other for items and accessories. In the latter's case, this mandates that while there are eight inventory slots, only four can be used for weapons with the other four restricted to non-weapon items.

The inventory is displayed in the stat profiles of units in all games; in addition to listing the items therein, it also displays the remaining durability of each item (where applicable), and in most games items can be selected to display their help description. When moving a unit, the inventory can be managed through the Item command, allowing weapons to be equipped and unequipped, items to be used (if usable by that unit at the time), and for items to be discarded to make room. Additionally, bases and the preparations menu provide for more robust inventory management, giving units access to depositing and withdrawing items from the supply convoy in addition to the functions available in battle.

Exclusive to enemy units is the ability to drop items upon their defeat, whereupon they are obtained by the unit responsible for killing them. Items which are dropped in this fashion are, in the majority of games, marked with glowing green text (the exceptions are Genealogy of the Holy War, where they are instead marked with a bag icon, and Path of Radiance and Radiant Dawn, where they are marked with pink text). In Echoes: Shadows of Valentia, they are marked both with a a bag icon and green text. In Shadow Dragon & the Blade of Light, it is not indicated at all, and the item may not even be in the unit's inventory. In Mystery of the Emblem, all items in an enemy's item inventory are dropped; this means that enemy staff users have their staves in their weapon inventory, and if an enemy drops a weapon or staff, they have one in both their weapon and item inventories. Upon being dropped by the enemy, the item is added to the unit's inventory (or, if their inventory is full, the player must choose to send either it or one of the other items in inventory to the supply convoy, or to choose one to discard entirely).

Enemies do not drop items at all in Thracia 776 and The Binding Blade. In both of these games, enemies still do carry items useless to them but desirable to the player; in these cases, the expectation is that the player should steal these items from the enemy.

In The Sacred Stones, if an enemy has multiple weapons in its inventory and one is dropped, the one that is dropped will be the one not currently equipped by them. As such, if they were to switch their weapon from what they initially had equipped, that weapon will be dropped instead of what was first shown to be a drop.

As part of an attempt to balance the game's characters and discourage dumping resources into a single unit,[1] Fire Emblem: Genealogy of the Holy War features numerous changes to how items work which have a direct impact on inventory. In this game, items cannot be freely traded between units, and instead must be sold and re-bought at pawn shops in order to be transferred to other units. Unlike other games, there is a set small number of weapons which exist in the game, and duplicates are seldom available; this actually has its benefits, as it mandates consistently repairing and reusing the same weapons, slowly improving them through the kill bonus mechanism, and these weapons are passed down from first-generation units to their second-generation children.

In Mystery of the Emblem, Genealogy of the Holy War, Path of Radiance, Radiant Dawn, Shadow Dragon, New Mystery of the Emblem, and Fates, there are a small few items which are locked to their initial bearer upon being obtained. This differs from personal weapons, which restrict the use of these weapons to one or a few units (although locked weapons are near-universally also personal weapons). Weapons locked in this manner cannot be traded, stolen, or discarded at all. In Radiant Dawn, however, this does not exclude these weapons from being droppable on the unit's defeat; in the event of a locked item being dropped, it ceases to be locked to the unit who was initially holding it. Additionally, in Radiant Dawn, certain skills can also be locked to a unit, which disables them from being unassigned from the unit.