This article is about the stat. For the staff from New Mystery of the Emblem, see Speed Staff. 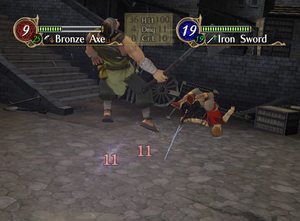 Edward has a very high speed stat that allows him to outspeed this enemy Bandit and attack him twice.

Speed (Japanese: 速さ speed), abbreviated Spd (Sp in Path of Radiance, Radiant Dawn, and Warriors), is a statistic belonging to units which determines a unit's agility in battle. It has two major purposes: it determines whether or not a unit is fast enough compared to their enemy to strike them multiple times in a single round of combat, and it influences a unit's ability to avoid enemy attacks. Broadly speaking, if a unit's speed stat is higher than that of their opponent by a certain number of points which varies from game to game, then that unit will perform a follow-up attack, a second attack after both units have performed their first attacks.

There are classes that inherently have high speed, most notably members of the Myrmidon and Pegasus Knight class families, which means that these units are predisposed to have very high rates of follow-up attacking and dodging attacks. It is common among high-speed classes to also have high skill, but in exchange for their good dodging ability these classes tend to be very defensively frail and to have mediocre strength. Similarly, it is common for bulkier and more defensive classes, such as the Knight class family, to have very poor speed.

In all games prior to New Mystery of the Emblem, a unit's speed stat is not the only deciding factor in their actual speed in battle, as it is affected by the weapons they wield. The weight of their weapons negatively impacts their speed, and is subtracted from their base speed stat to generate their attack speed, or the speed stat they will actually have in practice in battle. The heavier the weapon a unit uses, the harder time they will have follow-up attacking and dodging attacks. The weight system was removed from New Mystery of the Emblem through Fates, although Fates has a simplified form where certain weapons will increase or penalize a unit's ability to follow-up attack (but will not affect avoid).

Attack speed is a unit's practical speed stat in battle, after taking into account the weight of their current weapon. In every game until New Mystery of the Emblem, a unit's attack speed is used to calculate both their ability to follow-up attack and their avoid. With the removal of weight from New Mystery through Fates, attack speed is exactly equal to the unit's base speed stat.

Certain games use speed instead of attack speed to determine a unit's avoid rate.