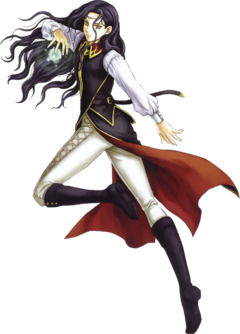 Limstella, one of Nergal's favorite morphs.

Morphs (Japanese: モルフ Morph) are a type of human-like monster created through magic. Morphs take the physical form of humans and primarily fight using the same forms of combat humans do. Morphs only appear in Fire Emblem: The Blazing Blade, featuring as a common lategame enemy type in the service of Nergal, the game's arch-antagonist.

Generally, morphs are identical to ordinary humans aside from four common traits: black hair, very pale skin, red lips, and golden irises.[1] Morphs can also be created in the image of a pre-existing person using that person's quintessence as demonstrated by several such morphs in the final chapter; morphs created in such a way will look identical to the original person with the exception of having sickly pale skin.[2] With the exception of Kishuna and his unique ability to project a magic-sealing aura,[3] morphs participate in combat the same way humans do, using the same techniques and the same weapons. As indicated by Limstella, morphs can be imbued with immense magical power beyond what they or an ordinary human could otherwise handle, but this is destructive and will quickly decay the morph's body and kill them.[4] Once dead, the body of a morph turns to dust.[5]

The main area in which morphs differ from their human counterparts is their mental and emotional range. By default, morphs are claimed to lack emotion, though as demonstrated by Kishuna, they can be granted emotions.[6][7] Morphs are capable of mimicking emotion, with Sonia tricking Brendan Reed into thinking she loved him. Renault and Canas speculate that all morphs have some unintentional emotional capability.[8] The mental capacity of a morph seems to vary drastically depending on their purpose; the three morphs which Nergal used to develop his plans – Sonia, Limstella, and Ephidel – are all intelligent and calculating, while other morphs such as Denning, who exist only to fight as part of an army, lack this; in Denning's case, it appears he was programmed only to pass on a single message to Eliwood's allies.[9]

Morphs are conceptually very similar to Idunn's war dragons, fabricated manaketes created only for battle, and both even originate from dragon research.[10]

Morphs have a short recorded history. There are occasional mentions of morphs in other ancient texts, meaning they may have some other unmentioned historical origin.[11] The research behind the creation of morphs mostly originates from the dragon village of Arcadia, where Nergal and Athos studied within the dragon libraries.[12] Nergal found the research into such creations and decided to use it for his own desires. Nergal is the common origin of all morphs in the series; Nergal's first experiments with morphs began of centuries before the events of The Blazing Blade.[13] Nergal recruited a wayward mercenary, Renault, for his experiments; Renault was changed by Nergal's experiments, no longer being entirely human himself.[14]

Two years later, after Eliwood and Hector assisted Lyn in warding off an attack by Laus instigated by Ephidel's advice to Darin, they journeyed to the Dread Isle and found Ninian in a small boat on the way. After recovering Nils and encountering the dying Elbert, they departed the Dread Isle and return to mainland Elibe. After this, at Uther's recommendation, Eliwood journeyed to the Nabata Desert, encountering the abandoned morph, Kishuna, before he met Pent and Athos; after being told by Athos to seek the legendary weapons to combat Nergal and his forces, Eliwood's party journeyed through Bern on a mission to the Shrine of Seals. During the Black Fang's battles with Eliwood's party in Bern, the original Black Fang's numbers dwindled and the organization's ranks began to be comprised almost entirely of morphs provided by Nergal and Sonia.[16] After the Black Fang was dismantled and the morph Sonia was killed, morphs became Nergal's primary servants to fight Eliwood and his allies directly, and he sent numerous morphs to stop them from returning to Valor, including one of Nergal's most powerful morphs, Limstella. Most of them were defeated in the final conflict with Nergal.

After the events of The Blazing Blade, the conflict with Nergal and his morphs became a historical secret, and the existence of these morphs never entered public knowledge. The battle and the morphs were never mentioned again by the surviving participants, with Canas in particular wishing for this.[17]

Morphs comprise the primary bulk of the enemy forces for most lategame chapters in The Blazing Blade. In terms of gameplay, morphs are identical to ordinary human units in terms of stats, weapons and appearance, differentiated only by name and lacking a luck stat as bosses, though regular enemies always have 0 luck.

There is only one morph-exclusive class: the Magic Seal, represented only by Kishuna. Magic Seals have no combat abilities of their own, but project a silencing field which blocks the use of all magic. Additionally, Limstella has a unique Sage variant with different maximum stats, including a boosted 30 defense cap instead of the standard 25.

Limstella is Nergal's "masterpiece", as he says; she possesses "perfect strength and perfect beauty". She is incredibly loyal to Nergal and does not outwardly express emotion.

Sonia is a morph working from within the Black Fang to manipulate it to her desires. She believes she is a human.

Ephidel is one of the first morphs encountered by Eliwood's party. He is cunning, but does not participate in combat, preferring to stay in informant roles.

Kishuna is a morph intentionally created with emotions by Nergal. However, Kishuna was unable to perform any function Nergal would find useful, and was banished. After this Kishuna wandered Elibe with a group of morphs seemingly not under Nergal's command.

Denning is a morph that serves as a message bearer for the forces that Nergal sent to invade Ostia castle to bait Eliwood, Hector, and Lyn back to Valor.