Eliwood and the others leave the Dread Isle and return to Badon. Lyn, Ninian, and Nils talk about the last time they were together, and Hector asks that the conversation change, as he was not present for their first meeting. Nils begins to describe his and Ninian's time on the Dread Isle; Elbert set them free when they were captured and they escaped by boat, but Nils was thrown overboard in a storm and Ninian lost herself without him. Nils explains that Nergal wants the twins as they can open the Dragon's Gate, and that Nergal can use quintessence—"the essence of life itself"—to call dragons; Nergal was attempting to orchestrate a war in Lycia to generate a great amount of quintessence, but instead gained what he needed from Elbert and his Pheraean knights. Nils continues to recount his with Elbert, who kept their spirits up in captivity. Eliwood breaks down again at the conversation, and the others, sans Ninian, leave him some time alone. Eliwood and Ninian mourn their troubles together, but this is interrupted by Ninian sensing enemies nearby.

Outside, Lyn, Hector, and Nils discuss the current status of Nergal. Nils states that the wound Elbert gave Nergal will not be fatal, as Nergal can use quintessence to heal wounds quickly and prevent aging. Nils then senses enemies nearby; Eliwood exits the nearby tavern and prepares to end the fight quickly to avoid endangering the villagers. 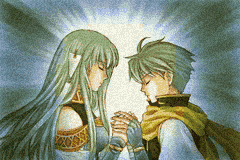 Nils sharing his power with Ninian.

At the start of the battle, Ninian attempts to leave the tavern and assist Eliwood. Nils tries to stop her but Ninian insists as she still feels responsible for Elbert's death. Nils relents and transferrs his power to her so she can aid Eliwood. Ninian leaves the tavern and finds Eliwood; Eliwood is reluctant to allow her to fight, but Ninian demonstrates her dancing which convinces Eliwood to allow her to join the battle.

Once the Black Fang are routed, Eliwood begins determining their next course of action. Eliwood comes to the conclusion that they should meet with Hector's older brother, Uther; Hector is slightly worried about this, as he has neglected to send Uther correspondence during their travels to Valor. Eliwood lightens up and teases Hector, and Lyn finds their shenanigans amusing.

Marcus takes Eliwood aside for a moment to mention he has contacted Eleanora about the death of her husband at his own discretion due to Eliwoods distress. Eliwood thanks Marcus for this. Eleanora's guard, Isadora, then arrives to tell them that Eleanora has received word of Elbert's death. Isadora delivers the message "Obey your father's dying wish" and agrees to travel with Eliwood.

Elsewhere, Nergal is still recovering from the wound Elbert inflicted. Nergal commands Sonia to mobilize the Four Fangs to kill Eliwood as "compensation", and commands Limstella to gather quintessence to heal his wound.

Eliwood's Tale: At last, Eliwood's long-awaited reunion with his father, as well as their painful farewell. After escaping the Dread Isle, they return to the port city of Badon. Eliwood remains silent for the duration of their passage. He sits cradling his father's cold hand as if to warm him back to life.

Hector's Tale: They find the man for whom they've been searching, Marquess Pherae. He breathes his last in the embrace of his son, Eliwood. The companions leave the Dragon's Gate and set sail for Badon. Eliwood is grief-stricken at his father's death. Hector can find no words to comfort his friend.

If Lyn's tale was played and Nils was not defeated in it, Ninian's stats (other than Constitution and Aid) will match Nils's at the end of Chapter 10.
In Eliwood's tale, Eliwood starts with a boost from Ninis's Grace.

Stats with two figures separated by a ~ are presented as a range, representing stats that vary due to random growths. The figures to the left and right of the ~ are the stat's minimum and maximum possible values respectively.
Main article: Oleg