Living Legend (Japanese: 生きた伝説 Living Legend) is the twenty-second chapter of Eliwood's tale and twenty-third of Hector's tale in Fire Emblem: The Blazing Blade. In order to play Chapter 22xE/23xH, the player must recruit Hawkeye by talking to him and gain 700 experience during this chapter. 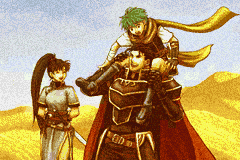 Eliwood and company heed Uther's advice and travel to the Nabata Desert to find a "living legend". Nils is overwhelmed by the desert's heat; Hector puts Nils on his shoulders, in spite of Nils's protests. As Eliwood and Ninian ponder when they will meet the "living legend", Eliwood notices that the heat is wearing Ninian down, and he offers for her to take his arm. Ninian hesitantly accepts; she asks why Eliwood treats her and Nils with such kindness despite their strange looks and powers, and Eliwood responds that he does not mind their apparent differences.

Elsewhere, Athos senses the approach of Eliwood and his group, and notes that Hawkeye will eventually find them and bring them to his location. Athos informs Louise that Pent will find the item he is searching for, but that he will soon be attacked by a group of bandits. Louise is not concerned for his safety, and informs Athos that she will wait for Pent's return and will be skipping dinner, which amuses Athos. As Louise wonders what the Lycian lords could want from them, she notes that Athos seems unwell; Athos gives a cryptic response about one's inability to stop fate.

Ninian spots a man fighting a large group of bandits. Lyn and Hector jump into action to aid the man; Eliwood sees no choice but to get involved and follows suit. The man, Pent, is being harassed by Jasmine and Paul to hand over his treasure; Pent refuses, and they decide to kill Pent for "breaking their hearts".

During the battle, Hawkeye appears. Eliwood or Hector (in their respective tales) can talk to Hawkeye, and he tells them that they need not fight, as he will take care of the bandits as the defender of the desert; neither Lord understands what Hawkeye means. The Lords may also talk to Pent, who speaks only briefly before departing, leaving the Lords confused.

After the bandits have been routed, the group reconvenes. If Hawkeye was not talked to, Eliwood and Hector wonder if Hawkeye is the "living legend" they were sent to find; Hawkeye informs them he is not, and instructs them to follow him to his master. Pent thanks Eliwood and Hector for coming to his aid, and asks why the group has come to the Nabata Desert. They inform him that they have come seeking a "living legend", which amuses Pent. After telling Hawkeye that he found what he was looking for, Pent begins to make his way towards Athos's location as Eliwood's group follows.

If the player met the requirements for Chapter 22xE/23xH and accepts the sidequest, the group treks through the desert. As they do so, Hector suddenly disappears, followed by Lyn; as Eliwood begins to look for them, he discovers the cause of their disappearance, as he too begins to sink into the sand.

If the player did not meet the requirements or declines to play the sidequest, the group arrives at Athos's abode. Athos greets the lords as children of Roland – the wielder of Durandal and founder of Lycia. He introduces himself as Archsage Athos, and confirms that he fought in the Scouring and is the "living legend" Uther spoke of. Athos reveals that he knows of the lords' intention to stop Nergal, but that doing so will be a great challenge; he informs the group that they must travel to the Shrine of Seals in Bern to find the power to truly slay Nergal. Pent introduces himself as Count Reglay of Etruria and Louise as his wife, and they request to journey with the group. If the tactician is present, Athos grants them the Afa's Drops.

Athos decides to warp the group to Pherae. Eliwood envisions his homeland and his mother, and is warped to her side along with his entire company. Eleanora is overjoyed to see her son and insists that his group stay the night. Eliwood attempts to make way for Bern immediately, but Hector and Lyn convince Eliwood to rest, which he thanks them for. If the tactician is present, in Eliwood's tale, Eliwood asks them about themself, as he knows so little about them; in Hector's tale, Hector apologizes to the tactician for doubting their abilities when they first met, and acknowledges their prowess on the battlefield.

The Nabata Desert. A wasteland of scorching sun and frigid nights. It rejects human life. Any careless enough to enter its embrace is doomed to wander lost. Uther, the marquess of Ostia, spoke of a living legend... Guided by his words, Eliwood/Hector heads straight into the desert.

See hidden items for more information on them.

Stats with two figures separated by a ~ are presented as a range, representing stats that vary due to random growths. The figures to the left and right of the ~ are the stat's minimum and maximum possible values respectively.
Main article: Paul

This is a desert chapter, meaning that all units except magic users and flying units will suffer a movement penalty when walking on sand tiles. Mounted units, like Marcus, Kent, Sain, and Priscilla, are especially weak on this chapter and should not be brought along if possible. Recommended magic users include Erk, Lucius, Canas, and Serra and recommended flying units include Florina and Fiora. While Heath is a flying unit, he also has very low resistance and will easily fall to the mages and archers littered across the map – bring him at your own risk. A thief has a 100% chance of picking up an item in the sand if he is on the appropriate tile, so bringing Matthew, Legault, or both is also recommended.

On Hector hard mode this chapter has fog of war, though it does not take effect until completion of battle preparations, so be sure to note enemy locations while they can be seen when arranging units.

Move Eliwood/Hector south so that he's closer to Hawkeye when he appears on turn 2 and easier to talk to and recruit. Don't worry at all about Pent dying – he can very easily deal with all the ground units and is very capable of killing either Paul or Jasmine. In fact, the greater danger would be if Pent kills all the units on the map and ends the chapter early. You can avoid this by rescuing him with fliers like Florina or Fiora and finish the chapter at your leisure. This is essentially required if you want to obtain every item hidden in the sand or play the sidequest after.

Jasmine is closer to the non-sand tiles and your spawn point, meaning you will have more options when fighting him. The recommended approach would be to bait Jasmine out with a unit that can take a hit, whittle him down from a distance with magic users, and finish him off with strong sword users like Lyn or Raven. Depending on your game mode, you can also steal a Guiding Ring or White Gem from Jasmine before you kill him.

You may not need to face Paul if Pent kills him first. If not, he may still be weakened by Pent – making the fight a little easier. If you must face him, a similar strategy with Jasmine should be suffecient: bait him to edge of attack range, bombard him with magic attacks, and finish him off with sword users if he is still alive.