Footsteps of Fate (Japanese: 運命の足音 Footsteps of Fate) is the first chapter in Fire Emblem: The Blazing Blade. In this chapter, Lyn learns of her heritage and the player learns about the weapon triangle, and terrain advantages. 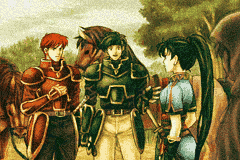 Kent and Sain formally introduce themselves to Lyn and the tactician.

Lyn and the tactician stop by Bulgar to stock up for their journey, and briefly make conversation with two knights of Caelin: the flirtatious Sain and the serious Kent. Outside of Bulgar, Lyn and the tactician are accosted by bandits, whose leader Zugu refers to her by the name "Lyndis". The two are reinforced by Sain and Kent, and together they rout the bandits.

After the battle, Sain and Kent relay the details of their mission to Lyn: they were tasked to find the daughter of Lady Madelyn of Caelin, who eloped with a nomad of Sacae nineteen years ago. Marquess Hausen initially disowned Madelyn for her actions, but after receiving a letter from Madelyn detailing her life and her daughter—who bears the name of his deceased wife, Lyndis—Hausen wanted to meet his daughter's family at least once, hence why Kent and Sain are in Sacae. Kent confirms that Lyn is indeed Madelyn's daughter, as they bear an extreme resemblance and Lyn was always called "Lyndis" in private with her parents.

Lyn is initially overjoyed to still have some family alive but soon remembers that Zugu called her Lyndis too. Kent then informs Lyn that the bandits were most likely sent by Lundgren—the next in line to inherit the title of Marquess Caelin—to kill her and prevent her from challenging his right to the throne. Despite Lyn's assertions that she has no interest in becoming Marchioness of Caelin, Sain speculates that Lundgren will not believe such assertions and will continue to make attempts on her life. Lyn, not wanting to reject an opportunity to meet the last of her living family, decides to make for Caelin with Kent, Sain, and the tactician accompanying her.

The apprentice tactician Mark and the young swordfighter Lyn. A strange pair on an even stranger journey. To prepare for the long road ahead, they go to Bulgar, the commercial center of Sacae. Unbeknownst to Lyn, she will discover something that will alter her life forever.

In this chapter, you recruit two solid cavaliers, Sain and Kent. Kent generally specializes in speed and swords while Sain favors strength and lances; they are both very reliable units, and it typically falls to the RNG to determine which one is better on any given playthrough.

In normal mode, this chapter will be partially scripted - guiding the player through the first few turns while explaining more mechanics of the game. On the first turn, Sain will attack the nearest brigand with an Iron Lance, miss his attack, and then get hit. Then Sain will receive an Iron Sword, Kent will attack the brigand, the game will explain the weapon triangle, and Lyn will kill the brigand. On the second turn, Sain will attack another brigand using an iron sword and miss again - the game will then explain how terrain affects combat and that units in a forest are harder to hit. Kent will then attack the brigand, leaving him wounded but alive, and Lyn will move forward on to a forest tile. On the third turn, the game will introduce the player to trading by having Sain move next to Lyn, trade a vulnerary, and consuming it to regain health points. After this point, the tutorial ends and the player is given control of the game.

This chapter is relatively simple to beat at this stage. Have Kent finish off the weakened brigand to the south and Lyn attack the brigand to the north - if Lyn gets hit, use a vulnerary next turn. For the few next turns, just keep moving your units east towards the enemy to finish them off. Depending on your random-number generation Lyn can kill the boss by herself, but if you want to be safe then attack with Lyn and finish him with either Kent or Sain.

In hard mode, this chapter is no longer scripted and Sain will not receive an Iron Sword. The level is still simple enough to beat, but you will primarily be using Kent and Lyn to attack. There will be the same number of enemy units, but the chapter may take longer to beat. On turn 1, have Lyn injure and Kent finish the nearby brigand, then send Sain to the northeast. On turn 2, have Kent trade his Iron Sword to Sain, who attacks the brigand; Lyn should head into the nearby forest. Your goal is to have Lyn clear out the southern bandits while Sain and Kent wipe out the northern ones, including the boss. Sain needs one point of strength to start two-rounding brigands, while Kent needs one point of speed to start doubling them. Played optimally, this map can be cleared in 4 or 5 turns, depending on how much HP and Defense the northern brigand has.