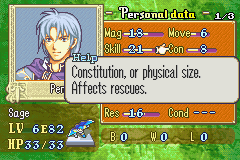 Constitution (Japanese: 体格 Build), abbreviated as Con or Cn, also known as Build, abbreviated Bld, is a statistic applied to units that represents that unit's physical size. Its original function was to alleviate the effects of the weight of the unit's currently-equipped weapon on that unit's attack speed in battle—prior to the statistic's introduction in Thracia 776, units' attack speed bore the full brunt of a weapon's weight, often crippling users of heavy weapon types such as axes. Constitution also affects whether or not units can rescue each other: a unit with a higher constitution can rescue one with lower, but not vice versa.

Constitution was removed entirely in Shadow Dragon, and did not reappear until Engage.