Siblings Abroad (Japanese: 旅の姉弟 Traveled Siblings) is the seventh chapter in Fire Emblem: The Blazing Blade. In this chapter, Nils asks Lyndis for help to save his sister, Ninian. After which Lucius appears and offers to help Lyndis to take down the Black Fang.

In order to unlock Chapter 7x, this chapter must be completed in 15 turns.

Lyn continues to make her way through Lycia and arrives in Khathelet, about a ten days journey north of their destination of Caelin. While passing through Khathelet, a boy named Nils stops Lyn and begs her to help him save his sister, who has been kidnapped by the Black Fang. Lyn agrees to help and confronts the enemy; before the battle starts, Lyn is approached by Lucius—a monk in service of the Elimine Church—who wishes to help Nils. 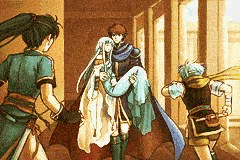 After Lyn and company defeat Heintz, they search the castle to locate Nils's sister, Ninian. As the group begins to fear that Ninian was moved to another location, Eliwood presents himself with Ninian in his arms, having rescued her. Lyn introduces herself as Marquess Hausen's granddaughter and explains her situation. Eliwood believes her story and offers to her in her journey to Caelin; however, Lyn decides to not unnecessarily involve Eliwood in her problems. Nevertheless, Eliwood tells Lyn that he will be in the area of Khathelet for the next few days should she have need of him.

After Eliwood departs, Ninian wakes up. Nils informs her that Lyn and her group saved them both from their assailants. Ninian is grateful and introduces herself and her brother as a traveling pair of performers. Although Ninian is a dancer, she twisted her ankle when she was caught by the Black Fang and cannot dance. Ninian's injury also prevents the siblings from safely traveling by themselves, so Nils requests that Lyn allow them to travel alongside her. Lyn fears the duo will be in more danger if they travel with her; however, Nils and Ninian insist they will be of use to Lyn as they have the ability to sense approaching danger. After consulting with Kent and Sain, Lyn decides to grant their request.

If Heintz was defeated within fifteen turns, Ninian realizes that her ring, Ninis's Grace, was taken from her when she was kidnapped. Lyn consults with the tactician and asks them if the group should pursue the bandits and retrieve the ring. If the tactician accepts, Lyn commands the group to pursue the Black Fang members seen heading to the south, and the player will play through Chapter 7x . If the tactician declines, Lyn thanks them for keeping her focused on their goal of reaching Caelin, and the player will continue on to Chapter 8.

This is the first chapter where the player has access to battle preparations and is not allowed to field every unit they have recruited thus far. The player is only allowed to choose 8 of their returning units, one of them being Lyn who is force deployed. Since there is nothing to steal on the map Matthew should not be deployed. Wil should also be benched temporarily as the player might need to use all of their mounted units to rescue drop units and clear the chapter within 15 turns.

If this map is played on the normal difficulty, the first action is a scripted fight between Lucius and the nearest dark mage. The sequence is intended to be an intro to the trinity of magic. The player will then be forced to play for Lucius with Nils, giving the player an intro to how dancers and bards work. After this point, the player is free to finish the chapter how they choose.

To clear this map quickly, use Florina to rescue Lucius and move to the other side of the mountains on the first turn. On the second turn drop Lucius onto a forest tile and retreat Florina behind the mountain. If you're playing on hard mode, you can rescue Lucius with Florina, wait on a tile within Nils's range, play for Florina, then drop Lucius on the other side of the mountain on the first turn. Lucius is very unlikely to get hit by any of the dark mages due to the bonuses he will get to his avo from the terrain and the trinity of magic advantage light magic has over dark. Additionally, Lucius only takes two damage from the generic dark mages while almost one-rounding them and only takes 3 damage from Heintz while dealing 7 damage in return. Assuming all of Lucius's attacks hit, Heintz should be defeated by turn 5.

If the player intends on playing Hector's tale and wants to access chapter 19x pt 2 Nils should be given experience at every opportunity. Nils must be level 7 by the conclusion of Lyn's tale, which is generally not going to happen unless the player does so intentionally.

If you're playing a ranked run of Lyn's Tale, make sure to get the Pure Water and Iron Lance before the chapter ends. Even if you do not plan on using them, they will contribute to your funds ranking and how much money Lyn has when she rejoins Eliwood and Hector in their respective stories.