Lundgren (Japanese: ラングレン, Lundgren) was the younger brother of Marquess Hausen of Caelin. 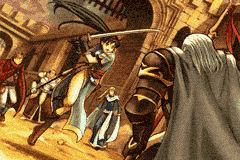 When Hausen received news that his errant daughter Madelyn had herself a child, Lyndis, his desire to reunite with his previously estranged family was interpreted by Lundgren as a potential obstacle to his ambitions to succeed the Caelin throne. In response, he began hiring and dispatching mercenary squads to pursue and capture her before she could reach Caelin herself, resorting to allowing them to execute tactics like attacking another Lycian duchy's castle just to capture her.

As the mercenaries proved time and again to be ineffective against Lyn and her band, he also began poisoning Hausen in an attempt to kill him and thus speed up the process of inheriting Caelin, and tricked the Caelin military into his service by claiming Hausen to be ill and that he was acting on Hausen's behalf. In this way, he used Caelin's army against Lyn, branding her an impostor and claiming the knights accompanying her, Kent and Sain, to be traitors to the territory. During this time, some close allies and retainers of Hausen disappeared, assumed to have been silenced by Lyn and Matthew; other important figures, like Knight Commander Eagler, were coerced into serving his whims by way of blackmail despite being fully aware of the monstrosity of his actions.

Eventually, Lyn and her band made its way past all of Lundgren's obstacles to the gates of Castle Caelin. Denouncing Kent as a traitor, Lyn as a fake and an unnecessary "Sacaean mongrel", and attempting to convince Sain to side with him, he nonetheless failed and was slain in battle, remaining resolute in his desire for the Caelin throne even with his last breath.

Lundgren is the boss of Chapter 10: The Distant Plains, and is the final boss of Lyn's tale mode.