Ostia (Japanese: オスティア Ostia) is a state of the Lycian League; it is the westernmost of the Lycian territories, close to the border of Etruria to the west, and bordered to the south and east by the territories of Thria and Worde.[1] As the largest and most powerful of the states of Lycia, Ostia and its marquess are the traditional leaders of the Lycian League as a whole.

In the era of The Scouring, Ostia was a humble village and the birthplace and home of the warrior Roland, who went on to become one of the Eight Legends and the wielder of the Blazing Blade Durandal. At the Scouring's conclusion, Roland returned to Ostia and used Durandal's power to restore life to the ravaged land.[2] From the town, Roland founded the modern state of Ostia and Lycia as a whole, reigning as the first Marquess Ostia.

Throughout the intervening years, Ostia remained the powerhouse of the Lycian League, economically and politically, and its marquesses consistently ruled as the leader of the Lycian League for a thousand years. Its military, the largest in Lycia, came to be primarily comprised of heavily armored knights, for which it became famous. Between its military might and its own structure, Castle Ostia has long held a reptuation as an impregnable fortress.[3] Ostia also became renowned as a center of education among the Lycian states, with the nobility of Lycia's other houses frequently coming to Ostia to study in their youth.[4][5]

During the year 981, in the midst of the mysterious disappearance of Lord Elbert of Pherae, Ostia's Lord Uther refused to directly involve Ostia in the search for Elbert or in the subsequent conflict with Nergal, instead leaving the task to his younger brother Hector, a friend of Elbert's son Eliwood; Uther died of illness late in the conflict, and following it rule of Ostia was succeeded by Hector. At some point later, following the death of Lord Hausen of Caelin, Hausen's granddaughter Lyndis abdicated from Caelin's rule and ceded the territory to Ostia, and Caelin was assimilated into Ostia's territorial holdings and placed under the administration of the Caelin knight Kent.

In the onset of the Disturbance of Bern in 999, Lord Hector was killed by the Bern army at Araphen, destabilizing the Lycian League. As a result of this turmoil, two Ostian knights, Legance and Debias initiated a rebellion and, with the support of the vast majority of Ostia's army, seized control of Ostia, took Hector's daughter Lilina as a hostage and declared an alliance with Bern. A small number of Ostian knights and a troupe of mercenaries previously hired by Hector continued to resist the Ostian rebellion with little success, until the arrival of Roy of Pherae, leader of the Lycian League army following Hector's demise. With the assistance of the Ilian mercenaries, Roy and the army broke into Castle Ostia and defeated Legance, reclaiming it. Following the battle, after driving off an attempt by Bern's General Narcian to capture Ostia, the city and Lycia as a whole was placed under the protection of General Cecilia of Etruria. 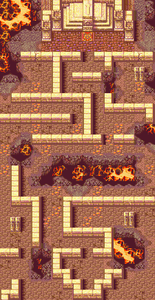 The capital of the Ostian territory, Castle Ostia is renowned as an impregnable fortress, a reputation proven wrong twice: first in 980 when Nergal warped a morph army in to kill Eliwood, Hector and Lyn, and again in 999 when Roy led the Lycian League's army on an assault of the castle to reclaim it from the traitors Legance and Debias. Surrounding the castle is a major city and hub of commerce.

At some point after the Scouring, Roland erected a small shrine deep within a cave at the foot of a volcano in Ostia's outskirts, and enshrined Durandal within it. The cave's lava pools and fiery terrain provided natural defenses against invaders, in addition to the magical seal placed upon it by Bramimond and the lingering spirits of Roland's former Scouring allies, led by Georg.

In the year 980, under Athos's direction and following Bramimond undoing the seal, Eliwood fought Georg's spirits to obtain Durandal for use against Nergal, after which Durandal was left unguarded. Twenty years later, a bandit group led by Henning occupied the cave as a hideout, and was driven out by Roy and Lilina in their quest to obtain Durandal for use against Bern's army.

Ostia is the subject of a small few chapters of Fire Emblem: The Binding Blade and The Blazing Blade. In The Binding Blade, Chapter 7 depicts Roy's battle in the city of Ostia to recapture it from Debias, Chapter 8 has Roy invade Castle Ostia itself to defeat Legance and rescue Lilina, and Chapter 8x has Roy challenge bandits in the Durandal cave to obtain Durandal for himself. In The Blazing Blade, Chapter 11 of Hector's Tale has Hector confront a small Black Fang squad while trying to sneak out of Castle Ostia's back door, Chapter 28 of Eliwood's Tale has Eliwood challenge phantom soldiers in the Durandal cave to obtain Durandal, Chapter 29E/31H has Eliwood, Hector and Lyn work to defend Ostia from a morph invasion sent by Nergal, and Chapter 29xE/31xH gives the three lords a relaxed opportunity to stock up on supplies before the final confrontation with Nergal.