This article is about the chapter of The Blazing Blade. For the Tempest Trial in Heroes, see Sands of Time (Heroes).

Sands of Time (Japanese: 悠久の黄砂 Eternal Sand) is the twenty-ninth chapter of Eliwood's tale and thirty-first of Hector's tale in Fire Emblem: The Blazing Blade. 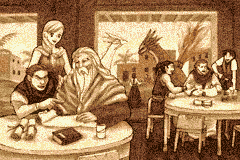 Athos recounts his and Nergal's studies in Arcadia.

The group arrives in Ostia; a soldier greets Hector and informs him that Uther has departed for a conference in Etruria. Inside the castle, Athos explains his history with Nergal. Athos met and befriended Nergal 500 years ago in the Nabata Desert, when they were in search of knowledge. One day, they discovered Arcadia in Nabata, where dragons lived in harmony with humans. Nergal and Athos erected a magical barrier to hide Arcadia and lived there for centuries, studying in their libraries. In Arcadia, Nergal learned how to steal quintessence and use it as power. Nergal was banished from Arcadia and fled to Bern, where he began making morphs.

Athos is interrupted by a soldier alerting that the castle is under attack. The group concludes that the forces were sent by Nergal and take to defending the throne.

The lead morph, Denning, repeats "This is a message from Lord Nergal: 'I await you on the Dread Isle.'" Lyn tells Eliwood to not overexert himself; Eliwood coldly responds that he is fine. Nils absent-mindedly wanders onto the battlefield before being shuffled off to a safe room.

The group manages to fend off the invaders long enough for reinforcements arrive and repel Nergal's forces. No longer under threat, Athos continues his story. Once Athos discovered how much more powerful Nergal had become, he assumed Nergal's next target would be the dragons of Arcadia, and prepared to defend it. However, Nergal instead went to the Dragon's Gate and called Ninian and Nils through it. Athos tells the group that the legendary weapons are their last hope, and he will go to Bramimond to seek his help in obtaining as many of them as possible to stop Nergal. Eliwood, Hector, and Lyn declare that they will go to Dread Isle to suppress Nergal's army of morphs and prevent him from ravaging Lycia any further.

Before Athos leaves, he ensures that Eliwood and Hector—in his tale—still have Durandal and Armads. They confirm that they still have the weapons, but have been uncomfortable with using them; however, they promise that they will not hesitate to use them against Nergal.

Later that night, Hector confronts Oswin about Uther; Hector threatens to kill him for keeping the secret, but Oswin remains silent. Hector concludes that Uther has died of his illness, and leaves the throne room alone.

Nergal returns to the Dragon's Gate with Ninian's quintessence and her dragonstone; he infuses the dragonstone with Ninian's quintessence, creating a tool which enables him to call dragons from the gate whenever he pleases. Nergal decides to wait and gather more quintessence from Eliwood's forces in order to recover from Athos's attack before calling the dragons, as they may break free of his control and kill him if he is too weak.

The placement of the two non-main Lords is based on their position in deployment order, which can vary from previous maps.

Nils's inventory can be managed during this chapter, but he cannot be deployed due to the plot.

The secret shop is located in the bottom-left of the map, in the 2×2 plains area outside the castle's walls; requires Warp.

All reinforcements are halted when Denning is defeated.

Stats with two figures separated by a ~ are presented as a range, representing stats that vary due to random growths. The figures to the left and right of the ~ are the stat's minimum and maximum possible values respectively.
Main article: Denning