For the character from Berwick Saga, see Saga:Elbert.

Elbert (Japanese: エルバート Elbert) is the father of Eliwood and the husband of Eleanora, and the marquess of Pherae during the first major arcs of Fire Emblem: The Blazing Blade; his disappearance is a major plot point of the first major arc of Eliwood's and Hector's tales.

About six months prior to the events of chapter 11, Elbert is contacted by Darin of Laus concerning a possible rebellion against Ostia; during this time, he attempted to convince Darin and Ephidel to have the Black Fang driven out of Lycia, presumably in refusing to join such a rebellion. This contributed to his disappearance at the hands of Ephidel roughly five months afterward, along with a number of his sworn men; the event of Elbert's disappearance is the catalyst for the start of Eliwood's journey, and indirectly does so for Hector as well.

Elbert first appears physically in chapter 18 (19 Hector), not too long after having set Nergal's children loose, to be informed of Eliwood's arrival on Valor with Ninian at his side; in the following chapter, Elbert defends himself against Nergal as Nergal prepares for his ritual, willing to put Ninian's life before his own, getting injured by Jaffar and later suffers a fatal wound by Ephidel's hand. Eliwood and his company arrive to Elbert's side, where Elbert makes one last offensive against Nergal, inflicting a grievous wound against him, before eventually dying in Eliwood's arms. Eliwood would eventually succeed Elbert as Marquess Pherae.

Elbert appears to have some unused unit data within the game's code. 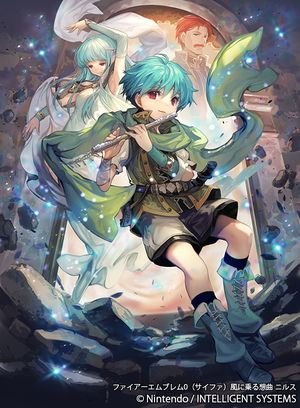 While Elbert has yet to get his own card, he does make a cameo appearance in one of Nils's cards.