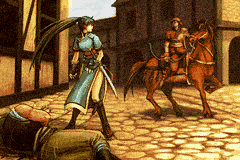 Lyn arrives in Lycia and stops in Araphen to request supplies from the marquess of the region. However, before they can receive the promised aid of Marquess Araphen that Kent arranged for, the castle is set ablaze by the mercenaries sent by Lundgren. Lyn is caught off guard by one of the mercenaries, but is saved just in time by Rath, a member of the castle guard. Lyn insists on aiding him against the mercenaries, since she is the reason why the mercenaries are attacking the castle. Rath reveals that there is a secret tunnel that leads to the castle that will enable him and his men to ensure the marquess's safety in a timely manner. Lyn realizes that she does not have any means of opening the doors to the rooms where the triggers for the secret passage are located; fortunately, the thief Matthew watched the conflict from a nearby house, and is willing to lend his services.

After defeating Bool and opening the secret passage, Rath and his troops suppress the mercenaries. Marquess Araphen requests a meeting with Lyn and her group; he rescinds his previous offer of supplies due to the annoyance he feels with being caught in Caelin's inheritance dispute. Additionally, Marquess Araphen claims that he does not feel comfortable lending aid to one "tainted with the blood of Sacae", nor does not want to sour his relationship with Lundgren, who he believes will succeed in becoming the next Marquess of Caelin as Hausen has fallen ill. Lyn refuses to beg for aid from a man who disparages her lineage, and takes her leave of the marquess. After Lyn departs, Marquess Araphen rants to himself that he would have lent Lyn the aid he promised had she merely shed a few tears and acted more humble. Rath confronts Marquess Araphen on his treatment of Lyn and his comments about the Sacaens; Marquess Araphen insists he is proud of Rath's work, but Rath accuses the Marquess of only reserving his judgments of Sacaens when they are subservient to him, and resigns from his service. Rath catches up to Lyn before she leaves Araphen; if he fell in battle, he informs her that he intents to travel Lycia and heal before returning to Sacae, but asks to join her on her quest if he was not defeated—regardless, he also gifts her gold before they depart Araphen.

On normal mode, the player is given a forced tutorial. On the first turn, the game will force you to visit the house where you can recruit Matthew, a Thief. Afterwards, the game will give a brief tutorial of how thieves and locked rooms work by forcing the player to open the nearest door with Matthew. Opening the door will reveal one of the three triggers that a unit must wait on top of to clear the chapter. Rath will be forced to activate the trigger, which causes a pathway that contains a single Soldier and a chest to be revealed. At the start of turn 2, Matthew will notice a chest and tell the tactician to move him to it so that he can steal it. The chest contains an Angelic Robe which the player should use before the end of Lyn's tale or it will disappear. Matthew will suggest you use it on someone with poor defenses like himself, however, you should give it to someone who will see more combat like Sain, Kent, or Florina. After this point the player will be free to approach the chapter how they see fit.

There is a trigger in the room to the south. Pick up the Door Key from the Village on the first turn with one of the mounted units so they can use Canto to move closer to the locked door. Take out the Soldier guarding the door with the units who did not grab the door key, open the door, then activate the trigger. It is worth noting that you do not have to "wait" on the triggers to set them off; If you move a mounted unit on top of the triggers and then use a Vulnerary, trade, or rescue/drop a unit while on top of the trigger, that unit will activate the trigger and then, using Canto, they can move away from the tile.

The best unit to take out Bool is Erk on account of the boss's zero resistance and lack of 1-2 range weapons. Erk at base can inflict twenty damage in a single round of combat to Bool. After attacking with Erk, Lyn can get the kill with the Mani Katti or one of the Cavaliers can with a lance or the Armorslayer.

The strategies displayed in the tutorials on Normal mode are not always the most efficient ways to clear a chapter; however, this chapter is an exception. The player should still recruit Matthew on the first turn, use Matthew to open the nearest door then have Rath stand on the first trigger.