This page details the changes made to the gameplay and writing of Fire Emblem: The Blazing Blade during its localization from Japanese to US English, and later from US English to the five European languages: EU English, French, German, Spanish and Italian.

Japanese to US changes

The table lists the character’s base stats in the Japanese version − the adjustment made in the English version.

The line refers to Aenir as if it were a location, when Aenir is actually a person.[2]
The second error occurred in the Final Chapter, in the special Nergal death quote which appears only if all Kishuna sidequests were completed: 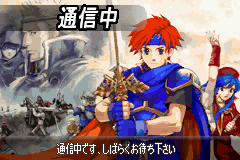 The connection loading screen for The Binding Blade data transfer in the Japanese version of Fire Emblem.

Being that Fire Emblem: The Binding Blade was never localized, the ability to transfer save data from that game into Fire Emblem was removed. The bonuses given by the data transfer were changed as a result:

Both scenes are in the epilogue by default in the US version and do not require unlocking.

US to European changes

Unless otherwise stated, all changes made between the Japanese and US releases are retained in the European versions, excluding names.

The game's dialogue font was changed for European editions, with the new font being similar but significantly shorter than the font used in US; this edited font was later used in all localizations of The Sacred Stones. All other fonts in the game, including the one used in gameplay menus, are unchanged.

Since no distribution events were ever run for European releases, the following items became completely inaccessible in gameplay. All of them can still be accessed through cheat devices and still function properly.

Three songs are inaccessible in the European release due to their methods of acquisition not being accommodated for. The first of these three is part of the extended epilogue, while the latter two were obtained through special events or a disk that came with Mario Kart: Double Dash!!, neither of which have European counterparts. The only way they can appear in a European game is through emulation; if a US or Japanese save file which has obtained the songs is imported, they will be available in the Sound Room, or hacking. The affected songs are: