Band of Mercenaries (Japanese: 小さな傭兵団 Small Group of Mercenaries) is the third chapter in Fire Emblem: The Blazing Blade. In this chapter, the player learns about ranged combat, flying units, weapon durability, and shops. 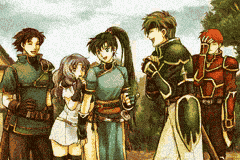 The formation of Lyndis's Legion.

Ten days after leaving the plains, Lyn's group comes upon a village that has been ravaged by the Taliver Bandits. The destruction of the village reminds Lyn of the bandits' attack on her own people, the Lorca, prompting her to reaffirm her oath of vengeance against them. Sain, Kent, and the Tactician are moved by Lyn's resolve and promise to accompany her when she does exact her vengeance. After this, Lyn finds her old friend and Pegasus Knight, Florina. Florina is being harassed by two bandits because she accidentally landed on one of them with her pegasus. Lyn rushes to Florina's side to comfort her and attempts to placate the bandits, but they are too agitated to listen, and attack; saying that both Florina and her pegasus would fetch a good sum of gold.

During the battle, either on the third turn or by visiting the closest villiage, Wil, an Archer, assists Lyn and the others in defeating the bandits. Once MIgal is defeated, he warns the group that the Ganelon Bandits will avenge him.

After the battle is over, Lyn asks why Florina followed her. Florina, in order to become a fully-fledged member Pegasus Knight of Ilia, was to set out to join a mercenary band but she wanted to see Lyn before she set out. Lyn points out that most mercenary bands are comprised of men, making Florina nervous as she is uncomfortable with men. Sain suddenly barges in on their conversation and encourages Florina to not give up on her dreams and invites her, as well as Wil, to join Lyn on her journey to Caelin. Florina and Wil accept Sain's invitation, and Lyn overlooks Sain inviting two members into her ever-growing party without her permission and accepts the new members. As they set out for Caelin, Wil coins the term Lyndis's Legion.

In normal mode, This chapter will teach the player about villages. Lyn will be forced to visit the southern village on the first turn, which recruits Wil. The player gets a small intro to Archers and is then forced to attack the nearest mercenary with Wil and then kill that unit with Florina.

The game warns you against leaving Florina is range of archers, however this is not as big of a deal as the game makes it out to be. Bows only get double weapon might against fliers in the American release of this game, meaning archers will do 8-9 damage to Florina in this chapter, which is no more threatening than the axe-wielders on the map; however, she cannot retaliate against archers without a javelin, which she doesn't have access to yet.

Form a choke point to the east of the southern village by placing one of the cavaliers on the forest tile and let Wil weaken the enemies on the other side of the wall. Eventually, you will be able to break through the enemies and reach the boss. Migal is carrying a Steel Axe, which is somewhat inaccurate and weighs him down to a speed stat of two. Everyone can double him with their base stats, except for Wil. Remember to visit the northern village before clearing the chapter as it gives you 2000 gold.

In hard mode, you no longer have to recruit Wil on the first turn and he will automatically join on turn 3, so there is no need to waste a unit's turn to recruit him. Since there are no forced tutorials in hard mode, you can move your units more efficiently before the enemy clogs up the choke point to the east. First, kill the archer closest to your units with one of the Cavaliers. Then, rescue the cavalier that just attacked with the other and use canto to move adjacent to the wall. Move Florina to a tile north of the unit holding the other cavalier and drop them on the other side of the wall. Make sure to move Florina back behind the wall so that she does not get killed by the Brigands and Archers. The cavalier on the north side of the wall will likely end up surrounded by the enemy, however, this enables Lyn and the cavalier on the south side to break through the choke quicker as they have fewer enemies in their way.