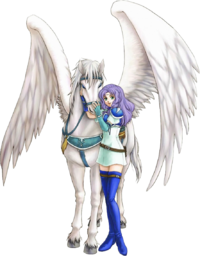 Florina with her pegasus, Huey, in The Blazing Blade.

The pegasus (Japanese: 天馬 pegasus), plural pegasi, is a winged horse-like species of animal domesticated by humans in the Fire Emblem series, first appearing in Fire Emblem: Shadow Dragon & the Blade of Light and present in every game since. Pegasi are primarily used by humans as steeds to ride into battle, comprising the Pegasus Knight and its various advanced forms, and are one of the series' four flying mounts, along with wyverns, griffons, and kinshi.

Cordelia, a Dark Flier in this image, atop a pegasus with black coloration.

Pegasi are close relatives of horses and have a very similar physical appearance. They are covered with short fur, and feature longer manes and tails, have four hoofed feet, and so on. Unlike horses, for the most part pegasi are only found with white fur and feathers, or rarely white with a cream-colored mane and tail. The only other major color variant of pegasi appears to be black, the color of the pegasi ridden by members of the Dark Flier class.

The exact nature of the biological relationship between horses and pegasi remains unknown in-universe, with characters expressing uncertainty about which evolved from the other.[1]

Unlike horses, pegasi posses wings and the power of flight, allowing their riders even greater mobility. Apparently, they do not fly with their wings, but by kicking the air while reserving use of their wings for gliding.[2] However, this trait is not reflected in Mystery of the Emblem or games from Path of Radiance onward, as in these games, pegasi are shown to flap their wings to remain airborne.

Falicorn (Japanese: ファルコン Falcon[3]) is a term first appearing in Fire Emblem Fates; it is used by Subaki to refer to Pegasi from outside of Hoshido.[4]

Fire Emblem Heroes uses the term to refer to Olivia's mount, appearing to be the one used by Falcon Knights, more clearly establishing what kind of Pegasus it is actually referring to.[5] This appears to confirm that the horned breed used by advanced classes is a distinct type of Pegasus; some depictions in previous games were ambiguous if the horn was actually a part of the Pegasus or a decoration on the Pegasus's armor. Like the standard pegasus breed, Falicorns are known to come in white and black colorations.

It is unclear if falicorns are considered distinct breeds in places other than Nohr, Hoshido, or Ylisse, as the term has not appeared in the dialogue in any of those games, though the Japanese name being derived from the Falcon Knight class implies that it is.

Concept artwork of a Falcon Knight and their horned steed from Fire Emblem: Genealogy of the Holy War.

Pegasi are gentle creatures by nature, and unlike horses, they appear to be much more reserved with whom they allow to ride them. They almost exclusively only allow women to command them, though seem willing to cooperate with men if their rider wishes it; additionally, male Pegasus Knights are seen as enemies in Fire Emblem: Mystery of the Emblem. Hoshidan pegasi, however, are more welcoming towards male riders. Pegasi naturally have a very strong resilience against magical attacks,[6] which is often reflected in the resistance stat of pegasus-mounted classes.

Pegasi appear to have a much smaller natural range than the horse, often only being utilized by countries where they occur naturally, like Silesse and Ilia. Judging by the countries they originate from, the species as a whole seems to prefer frigid climates. Pegasi may also have particularly long natural life spans, since Queen Elincia's pegasus partner was the same pegasus once used by her late great-grandmother.[7]

Nine classes in total have used pegasi as mounts throughout the Fire Emblem series. The following classes ride the typical hornless breed: